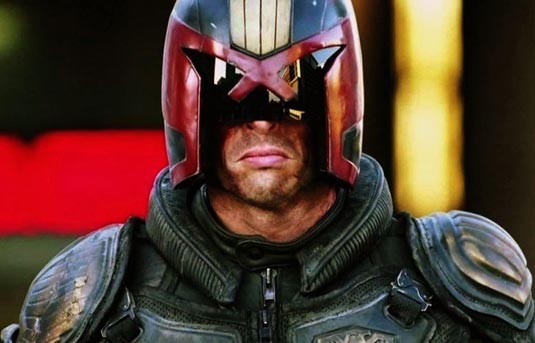 There are some movies, books and television that are summarily written off. The global hivemind passes judgement and somehow we all know, "Nope, don't bother...that isn't worth my time." Given the absolute amount of media out there to be consumed these simply pass on without a second thought never to be seen again.

I am going to kickoff a series of articles that explore and challenge this phenomena focusing each week on something that was universally passed over. I don’t want this to be one-sided tho, I want your thoughts, your feedback and even your posts if you have something you want to present. Going to play with the format some and I expect this to evolve over time. Let me know what you think! I am going to challenge myself to consume something that has a stank on it. On trial this week: 2012’s Dredd.

IMDB Synopsis: In a violent, futuristic city where the police have the authority to act as judge, jury and executioner, a cop teams with a trainee to take down a gang that deals the reality-altering drug, SLO-MO.

Accusations: So I went ahead and watched this film before researching what critics thought of it assuming I knew how they felt given the general talk about this movie. If you were to ask me in a vacuum what critics and people thought of this movie I would have told you it was universally panned. Imagine my shock when I see according to Rotten Tomatoes 78% of critics liked it. What? NPR gave it a 95 out of 100! Ok, Boxofficemojo says it made $13 million domestically and $22 million internationally meaning it did not make back its $50 million dollar budget. So, critics liked it and no one went to see it. What happened? How did this bad word of mouth stomp the movie’s success? Did the accusation of Dredd of lifting its plot from the prior year’s Raid: Redemption

Defense: This is a good movie, not great but given the low expectations out there prepare yourself to be impressed. Cast is solid with Karl Urban putting on the mask (and to his credit never takes it off), Game of Thrones Lena Headey takes on the role of the villainous Ma-Ma and Olivia Thirlby steps in as Dredd’s rookie partner (and adds something to the story that was unexpected, original and really compelling). This movie is ultraviolent at times, but no more so than a Kickass or Sin City. The action sequences are solid, the slo-mo effect is highly effective, the cinematography was stunning and the story itself was a compelling one. The accusation of lifting the plot from Raid : Redemption one can understand given the fundamental parallels, but the movies ultimately are quite distinct given the similiar subject matter of fighting one's way up a building level by level to get to the big baddie.

Summary: If you are looking for a solid action flick and don’t mind a few sequences of people getting shot through their face this movie is for you. It is better than a popcorn movie and I would go as far as to say it is almost great. I am very glad to have seen it, but feel no need to ever rewatch in the future. It accomplished its goal of being enjoyable ride, but ultimately it is disposable. I conclude this movie got a bad reputation because of its box office failure. Critics loved it, but because no one went to see it a self-fulfilling prophesy was set in motion where, “Huh, people aren’t seeing it, it must suck.”

Verdict: Don't believe the hype...listen to the critics: Worth a watch, worth your time. (also, make it a double feature with Raid: Redemption )

2 Responses to "On Trial: Dredd"