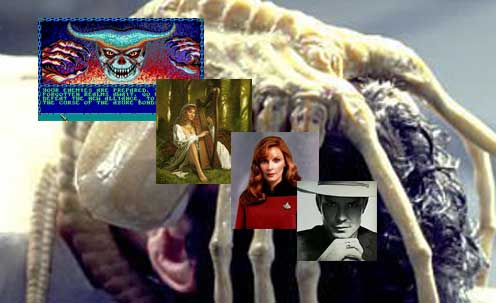 We blast into 2013 with some nooooooos! and enjoy some classic GWC banter. And we run down the Week in Geek, including newly revealed details about Gates McFadden’s Season 2 departure from Next Gen (it had to do with sexism, despite the gender equality Beverly insists upon to Soren of the sack-cloth); the UK’s X-rating of the original Alien (no “sss”) movie due to sexual, um, confusion, it might instill in middle-schoolers; a cool piece in the Atlantic featuring the evolution of sci-fi book covers; news that Elder Scrolls will become an MMO this year (without dragons!?!); and the Shat’s squee-worthy Twitter exchange with Chris Hadfield of the ISS. Plus, Sean pumps the new season of Justified, we give props to a kick-ass Lego Iron Man proposal, and talk a little Voyager, including the obligatory Kazon Hair Report.