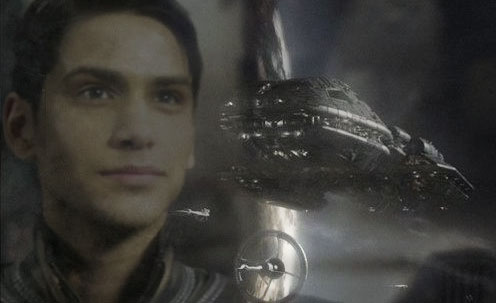 We are thrilled so far with the new BSG content, the web series Blood & Chrome airing now on the YouTube Machinima channel (and on SyFy/every other digital medium) in February 2013. We credit the series with reigniting our love for BSG with Michael Taylor’s strong writing, character development balanced with space explosions, and Luke Pasqualino’s expressive doe-eyes that lend depth to the cocksure young William Adama. And we run down the Week in Geek, getting stoked over new Halo 4 gameplay, a new exhibit-like Star Trek book sold with its own pedestal and removable artifacts, and the new translucently buff Swedish Tarzan. Plus, we marvel at the unusual Franco-Belgian roots of the Smurfs, and start an important new campaign to get Rodimus Prime brought back to the Transformers franchise. You can help! #RodimusNow

One Response to "#350: There Will Be Blood and Chrome"