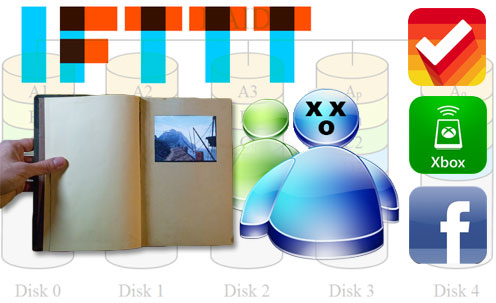 Juan tells us a bit about his recent RAID woes and offers advice for how to think about storage and backup. We take a look at the site IFTTT.com (pronounced like “gift” without the G) which helps you automate tasks between online services like Facebook, Flickr, Evernote, and Google Drive. We note the passing of MSN Messenger. We discuss the hacked Myst book. We run down some recent app updates including Microsoft’s new XBox remote control app SmartGlass for mobile devices, an new iCloud syncing option for the Clear task app (and an overpriced Mac version), recent changes to the Facebook iOS app, and the mobile version of Evernote 5. Finally, we take listener calls, including questions about Dynaflo Liquid Armor and Reminders app syncing via iCloud plus a new take on the Podcasts iOS app.