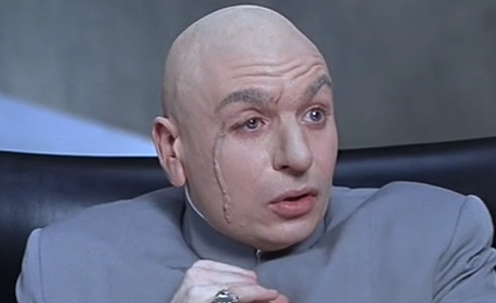 In this episode, we kick off our “Villains We Love to Love” arc with a look at the sympathetic and narcissistic Doctor Evil, his pitiful, neutered grasping for power, and the important line between villains who are likable, heroic foils and villains who are just plain scary.  We also give props to the Brits’ sense of humour about themselves in the pop-music-laden Olympic closing ceremony, wonder why accents disappear when people sing, and riff on the endless parade of white guys starring in “ethnic” films. And we run down the Week in Geek, speculating on the new Red Dawn remake (starring North Korea as the latest Feared Villain), drop jaws at the industrious dude in China who crafted his own bionic arms, promote the awesome Gamers: Hands of Fate Kickstarter, and get stoked about former SG-1 writers’ upcoming web series Delete, starring Seth Green.