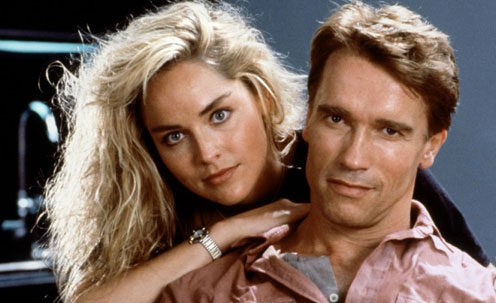 We continue our “B” movie arc with the epically cheesy 1990 sci-fi flick Total Recall and realize that Arnold’s mechanical acting is ideal for a robot or a comic straight man but less convincing in Recall‘s mind-frak thriller landscape. We discuss the evolution of profanity in movies from the 80s to now, marvel at the fact that Recall‘s dated, over-the-top violence can still shock, and appreciate Sharon Stone’s evolution from the backstabbing, fluffy-haired bimbo in Recall to the slick-haired, ruthless corporate HBIC of the mid 90s. We reminisce on our favorite Arnold movies of all time (Sean’s is especially awesome) and excitedly anticipate this week’s release of the Mars-less Colin Farrell reboot, noting that the original film’s premise and the seminal Philip K. Dick story are far too promising not to remake. Plus, we run down the Week in Geek, with some more Olympic love, discussion of the “Blade Runner,” and props to inspirational people who pursue fitness against all odds; and we share news on the soon-to-premiere NBC show Revolution (September 17, produced by J.J. Abrams), SyFy’s newly-greenlit M. Night Shyamalan series, Proof, and the go-ahead on the film Chewie, which will focus on Peter Mayhew’s unique experiences behind the scenes of the first Star Wars.