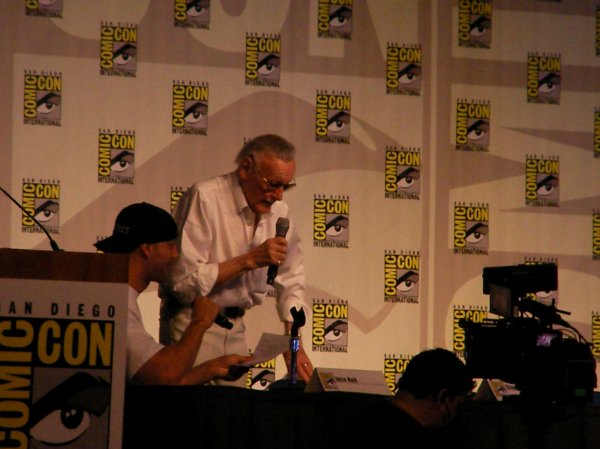 As they announced at the panel this year, Stan Lee's new YouTube Channel, World of Heroes, will feature eight new shows. The panel included Stan Lee (the man is hilarious!), Mark Hamill (he did the Joker voice!), Peter David (The Hulk), Jace Hall (executive producer on the recent ABC remake of V), Adrianne Curry (America's Next Top Model -- or, as I know her -- Peter Brady's ex) and Bonnie Burton (The Star Wars Craft Book).

There was a lot of joking around amongst the panel members. We got to see trailers for each of the new shows, all of which got a good response from the audience (including me). I've already subscribed to the channel. Here's a list of the shows with brief descriptions from the trailers:

Stan Lee's Academy of Heroes - Takes real-life aspiring heroes from all over the country and gives them the mentoring and training they need to take their fight for good to the next level.

Geek Therapy - America Young stars as a caring therapist who helps geeks with their emotional needs.

FanWars - Producer and judge Jace Hall (The Jace Hall Show, V, The Morning After) and his panel of celebrity experts pit fan against fan as they debate topics from the realms of comic books, superheroes, science fiction, and more.

Bad Days - Cartoon shows us heroes and villains on their worst days.

Chatroom of Solitude - Comedic glimpse into the mundane moments of super lives. Told through a G+ video hangout, we eavesdrop on heroes and villains when they're off the clock and bitching about a tough day at work to their friends, colleagues and enemies.

Super.Model - Two aspiring models, Bree and Sera, and blogger friend Lizzie are accidentally exposed to a mysterious serum that grants them super powers.

You can see the teaser trailers online here. Some of these shows already have their first episodes online!