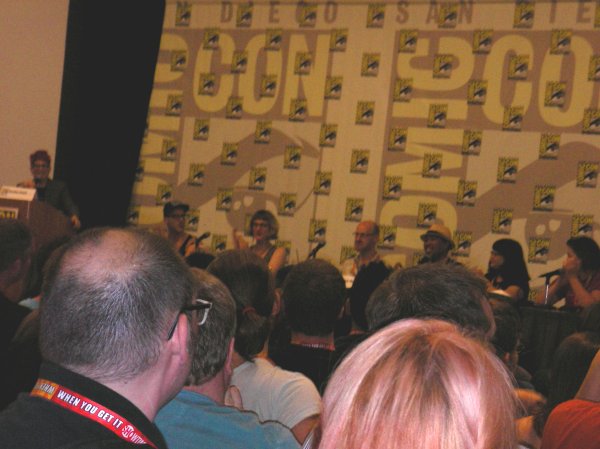 SDCC 2012: Sci-Fi That Will Change Your Life

I attended this panel on Friday, July 13th, with moderator Annalee Newitz (io9), Cyriaque Lamar (io9), Charlie Jane Anders (io9), Phil Plait (writer/scientist, Bad Astronomy), Deric A. Hughes (producer/writer, Warehouse 13), and Sarah Kuhn (writer, One Con Glory). There was another person onstage whose name I did not catch and who is not in the SDCC schedule.

The panel was very enthusiastic about their topic and kept the audience engaged for the hour. Phil Plait (a.k.a. the Bad Astronomer) was fun to see live rather than as only a podcast voice. I believe he discussed Redshirts. Ian McDonald's works were mentioned, as well as Dash Shaw's new graphic novel BodyWorld and Rick Moody's dystopian-future novel The Four Fingers of Death.

The panelists discussed their favorite books and movies for the prior year -- the ones that really made them think. So I thot I'd list their picks here with their Amazon.com or trailer links for everyone to check out. I know I'll be grabbing several of these books in the near future and seeing the movie if it shows up at one of my local theaters.

Ready Player One by Ernest Cline

The Name of the Wind by Patrick Rothfuss

Movie (they only mentioned one):

Synopsis: Three magazine employees head out on an assignment to interview a guy who placed a classified ad seeking a companion for time travel.