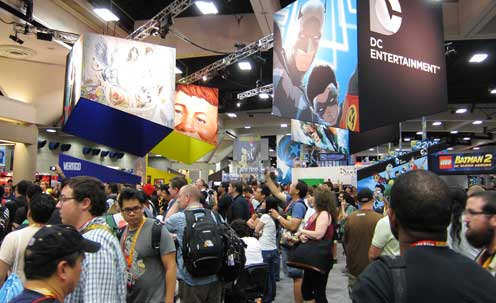 We review our favorite parts of this year’s San Diego Comic-Con, including bronies, ubiquitous butt cheeks, Sean’s awesome art acquisition, and hanging out with the small press peeps; and we feature a segment recorded live with a band of GWCers at the con! And we run down the Week in Geek, reviewing some newly-announced Emmy noms including Game of Thrones (Best Drama Series), The Big Bang Theory (Best Comedy Series), BBC’s Sherlock (a ton of nominations, including best miniseries), and nods to Futurama, Mythbusters, Robot Chicken, and our recent favorite, Parks and Recreation. We also appreciate Karl Urban’s Comic-Con slip of the identity of Benedict Cumberbatch’s villain in the upcoming Trek movie; and we geek out over plans for the Marvel character Falcon to join the Cap — and Michael Fassbender to bring Assassin’s Creed to the big screen.