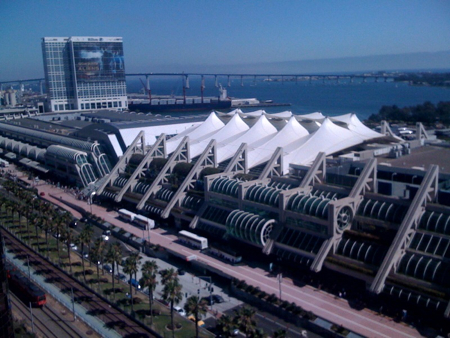 What’s Your Con Personality? Delights & Differences of Comic-Con and Dragon*Con

I just returned from my first Dragon*Con and my head is still spinning. I’ll be honest with you, I didn’t think any event could match Comic-Con for geek impact and intensity, but I was wrong.

A lot of people like to compare the two Cons in a heated exchange. I think this is unnecessary. Both are fantastic events with vast and varied programming, cosplay opportunities, and star gazing. It’s important to understand the key differences between the two if your time and budget limitations allow for only one event each year.

Let’s take attendance figures out of the discussion right off the bat. Any event that has 60,000 less people at it will be more user friendly -- period. Dragon*Con is smaller and more intimate feeling than Comic-Con, but you’d be doing yourself a disservice if you based your decision on that alone (unless you have an extreme fear or aversion to large crowds). I’d like to explore six key areas of a con experience in order to help you decide which event best suits your needs.

LOCATION: Hands down, San Diego in July is more pleasant than Atlanta in September. While Atlanta is a wonderful, fun city, Dragon*Con’s location in downtown doesn’t lend itself to exploration on foot, especially after hours. There are a few chain eateries near the six main hotels that host the con, but most people rely on the Food Court at Peachtree Mall and vendors inside the hotel. In short, you stay in or around the Con 24/7. Downtown San Diego offers many possibilities, the majority within walking distance. Between the Gaslamp District, Seaport Village, and Little Italy, you can enjoy some great meals. If you’re interested in doing things outside the con, San Diego’s beaches, parks, zoo, and arts activities offer a variety of options (with more temperate weather than Atlanta’s).

(It is also important to note that Atlanta’s MARTA light rail system can get you from the airport to the convention center for $2.50 each way, making a rental car unnecessary.)

DEALER ROOM: If you like to shop, San Diego Comic-Con is the Geek Mall of the Universe. All the big names in gaming, TV, collectables, costuming, and comics will have booths as well as an area for smaller, independent dealers and fan groups.

Dragon*Con offers less space for dealers, but what they have is high quality, especially in the Art Gallery area.

PROGRAMMING: This is a tie. At Comic-Con you get the latest, newest content panels and special screenings courtesy of Hollywood. Lots of stars attend Comic-Con and some studios offer swag gifts for panel attendees. If you favor current (on TV now or coming soon to a theater) programming, Comic-Con is the place for you.

Dragon*Con has its programming divided into tracks -- Star Trek Track, American Sci-Fi Track, Science Track, Writer’s Track -- with 42 tracks in all. Their new Con app made finding the programming I was interested in quite easy, since I could search either by day or track for content choices. (I have not used the Comic-Con app for 2011 but I imagine they have one that works well.) This track system consists primarily of fan-based content, although there's a limited amount of current programming offered (e.g., Dr. Who, Warehouse 13, and The Guild) with celebrity guests. The panels tend to be more detailed than what you’ll find at Comic-Con. For instance, the Tolkien’s Middle Earth Track hosted Costuming With Leather and an Elf Choir Workshop panel this year. If you want to discover new things about content you’ve loved forever, Dragon*Con is the choice for you. PLANNING YOUR CON SCHEDULE: You will not see or do everything you want to at either of these cons. Each approaches seating their panels differently. At Comic-Con you wait in line for hours to be let into either Hall H or Ballroom 20 and end up staying there most of the day, depending on which panels you want to see. If you leave the room, you lose your seat (except for potty breaks during the panels). Not everyone will make it into the popular panels, and there are many disappointed people at Comic-Con. If you’re not willing to get in line early (by 6 or 7 a.m.), you run the risk of not getting into your favorite panel.

At Dragon*Con they empty the room after each panel. Even if your next panel is in the same room you still must leave, get in line, and reenter the room. This allows a greater amount of people access to each panel. So no “camping out” as we tend to do at Comic-Con. Even with this system, there were a few panels I didn’t get into. Some things I missed because the geography of Dragon*Con (six hotels) made it impossible for me to get to the next panel despite their 30-minute break between each one. I’ll admit; I was less stressed at Dragon*Con. I felt like I had a fair shot at getting into what I wanted. I did skip things in order to get in line (D*C lets a line form one hour before each panel) but I didn’t have the same heart-pounding moments like I do when I enter (sprint into) Ballroom 20 at Comic-Con.

I know when I’m at Comic-Con I’ll be waiting in line a lot -- that's how I have to roll. It’s never been tedious or boring because I’ve either been with friends or made new ones.

In terms of scheduling, Dragon*Con is easier, but you can still have an extremely satisfying experience at Comic-Con if you’re willing to do the work for it.

NIGHTLIFE: Hands down, Dragon*Con wins this round. There are great parties at Comic-Con—for the celebrities. (Obviously GWC Meetups are the exception to this rule!) But because D*C is hosted by hotels rather than a convention center, each has a huge lobby area with bars and restaurants for hanging out. And that’s what people do. It’s sort of like a fellowship hall for geeks. At D*C, the celebrities hang out in the hotels, too, because they want to see all the amazing cosplay (Steampunk was the fashion trend of the con this year). Dragon*Con’s programming also gives it an advantage because panels go well into the night (as late at 11:30 p.m.). Since people don’t need to get in line at 6 a.m. for a 10 a.m. panel, they can stay up later and sleep in a bit. (The adult nature of the cosplay at D*C during the night is subject matter for another post.)

In comparison, Comic-Con doesn’t really offer great gathering places at the convention center. With so many people in one space, it’s tough. FUN FACTOR: I have to give another nod to Dragon*Con for their DCTV programming that is streamed into all the hotel TVs and the big screens in the panel rooms. It’s like SNL for geeks. My favorite mock-TV show plug was for Storm Troopers Gone Wild. Check them out at web.dragoncontv.com

Both cons will host author signings, giveaways, costume contests and autograph/photograph areas with the celebrities.

In conclusion, you won’t get me to say which con is better. I enjoyed Dragon*Con so much that I’d like to alternate going to it and Comic-Con. My wish is that everyone who wants to attend one or both of these cons gets to. Hopefully, this post will help you to decide where to start so your experience is less Kahn#%&@ and more Con!!!!!!

2 Responses to "What’s Your Con Personality? Delights & Differences of Comic-Con and Dragon*Con"