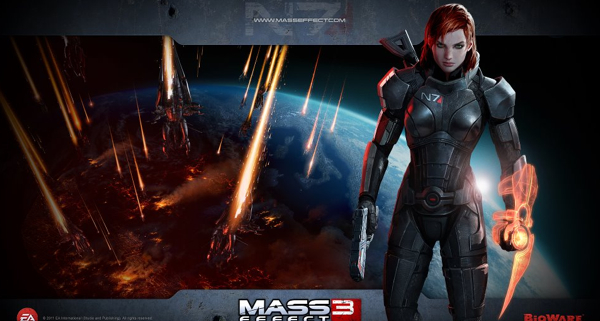 The votes are in: FemShep will be a kick-ass ginger. This week at the Penny Arcade Expo (PAX), BioWare unveiled the final image of the female Commander Shepard for the cover of the upcoming Mass Effect 3 (to be released in March 2012). In two heavily debated rounds of voting, fans on Facebook voted for facial structure and hair color on various versions of "FemShep" (or as Chuck and I call her, "Shep" -- the other Shep is "ManShep"). Here's the voting breakdown, according to MSNBC:

Interestingly, before voting Round 2, blonde FemShep was way ahead in the polls, much to the chagrin of Kim Richards at PCGamer.com. However, some speculated it was the hairstyle that pleased the crowds rather than the color. So FemShep kept the hairstyle, and in the end it was the cut that won out -- except this time a redhead -- and with quadruple the votes of the blonde.

The acclaimed actor Jennifer Hale, who voices the female Shepard in ME1 and ME2 (as well as, incidentally, lady protagonist Samus Aran in the Metroid Prime game series) spoke at PAX after the announcement:

"I want to say a huge thank you to everybody out there who plays FemShep who spoke up and said 'we want to see FemShep,'" Hale told the cheering audience as the results were announced. "You have no idea what that means to me."

Indeed. It's about time we see a female Shepard get some props. Even if only 18% of ME players chose to go peen-less, how many more might have gone with a few role models paving the way?

A few other things are worth noting here. First, while not unprecedented, BioWare's choice to feature a female Shepard as the default protagonist (at least on half of the collectors' editions) is still pretty rare in the gaming industry, and it should be applauded. Female video game characters, while not hard to find, are usually featured as sidekicks, allies, or romantic interests to male protagonists (who generally represent male consumers). But let's explore a few of the notable exceptions. Samus Aran, the female bounty hunter soldier from the Metroid Prime series, is born human but raised by bird-like Chozo aliens who inject her with their own DNA and give her a powered exoskeleton that melds with her mind and body. Samus' revelation as female at the very end of the original 1986 Nintendo game made players focus less on her sex -- and helped earn Samus the reputation as one of the least sexualized women characters in video game history. Aya Brea is the tough Euro-Japanese, mitochondrially-pumped NYPD cop and later FBI detective of the Parasite Eve series. Special squee for Chuck fans: Brea is voiced by Yvonne Strahovski in one game version -- Parasite Eve: The 3rd Birthday. Aya has been called a "tasteful game heroine," though she is also a sex symbol in her own right, making GamesRadar's, um, prestigious list of "Videogame Characters We'd Go Gay For." Lara Croft of the Tomb Raider series is a gun-toting, multilingual, intelligent, athletic, British-accented adventurer and archaeologist. She was initially conceived as a rejection of the "bimbo" and "dominatrix" stereotypes of female game characters -- Toby Gard, lead graphic artist of Core Design, based the character on inspirations from Swedish pop star Neneh Cherry and comic heroine Tank Girl. Originally the character was an athletic, braided South American woman named Laura Cruz, but the management at Eidos changed her name and background to be more UK-friendly. (At least we get to hear her voiced in four games by the fantastic Keeley Hawes of BBC's Ashes to Ashes. Speaking of who we'd go gay for...) While Gard maintains the character's sexiness came from her power, the decidedly busty Croft is widely recognized as the first mainstream sex symbol in video games. Ironically (or not), she is still considered the most recognized female video game character, and has been credited for the later development of stronger female game characters. Chell is the player character and protagonist of the Portal games, and her sex is revealed only when a player catches Chell's reflection in an adjacent portal. Mimicking the "silent protagonist" role of Gordon Freeman in the Half Life series, Chell does not speak and is rarely addressed by name. However, this enables players to see the world through Chell's eyes, making her a quite effective protagonist: her female-ness doesn't intrude into game play, and no one inside the game or out really calls attention to it. (Of course, there are the double-edged articles on GamesRadar, simultaneously lauding Portal as a subversive, feminist, social commentary and lamenting its lack of boobage.) GLaDOS is, of course, the psychotic, hilariously abusive AI who keeps the masochist in us coming back for more. While not corporeal in the traditional non-potato corpus, GLaDOS still fulfills a modern-day wicked stepmother image whom we love to loathe.

There are certainly other female video game protagonists, as well as other female game characters that can be considered self-possessed and independent. Of course, simply kicking ass or talking tough do not an independent woman make -- but it's a good start. Kudos to BioWare for challenging the limits of tradition and appealing not just to girl gamers, but to anybody who's interested in experiencing gaming from a more complete perspective that's true to the human condition.

2 Responses to "The New FemShep and Female Game Protagonists"