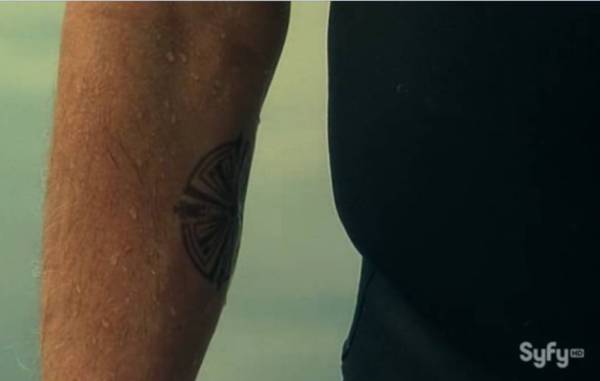 GWCers are no strangers to tattoos. However, the strange tattoos in SyFy's Haven are far from just a sign of camaraderie. The tattoos were first introduced near the end of Season One and have been prophesied to be the harbinger of death for Haven's Duke Crocker. In this past Friday's episode, "The Tides That Bind," the tattoo re-emerged as an integral part of the plot, along with the seemingly sinister acts of Reverend Driscoll and the newly-introduced Mrs. Duke Crocker, "Evi" Ryan.

The tattoos are always found on the inside of the forearm close to the elbow joint. Very little else was exposed about them other than a bearer of a tattoo killed Duke Crocker's father Simon Crocker years ago. This is just another event in Haven that appears to be repeating itself from the events in 1983.

Duke had a very brief opportunity to ask the bearer of the tattoo, a troubled old man named Cole Glendower, about the tattoo and about Simon. Cole's limited information plus the list Duke obtained from Reverend Driscoll's office puts the pieces together that the tattoo bearers oppose Reverend Driscoll, and Duke is being watched so as not to follow in his father's footsteps.

In an earlier episode a couple of weeks ago, "Roots," Duke revealed to Evi that his father had him promise that if The Troubles ever returned, Duke would remain in Haven. But Simon failed to disclose anything further to Duke before he died. And by the looks of things, Duke is keeping to his promises.

So The Troubles have returned to Haven, Duke is keeping his promise to his dying father to stay, the men with the strange tattoos will actively oppose the Reverend Driscoll, and a man with the same tattoo is destined to kill Duke Crocker. I, for one, am looking forward to see exactly what role Duke will play in the future in Haven. This is a storyline worth watching.