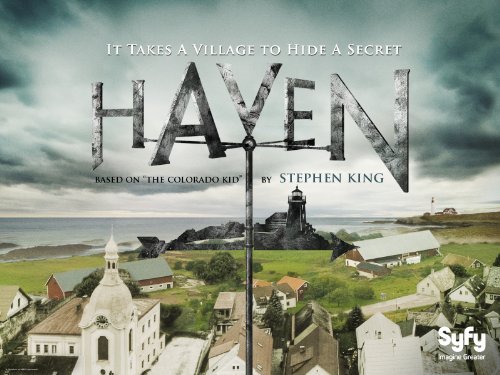 Haven’s Got Troubles — But What the Hell Are They?

Last year I wrote about this amazing SyFy show that debuted in July 2010 set in a quaint Northeastern coastal town called Haven. Based loosely on Stephen King's The Colorado Kid, this show continues to amaze and captivate me. It's a well put together story with great acting and, as Chuck often puts it, "a lot of heart."

But Haven's got troubles. No, not the kind that face Eureka (or any Fox show). Haven's residents are somehow bestowed with special powers -- powers that laid dormant but recently returned. Together these powers are called "the troubles." But what are these troubles exactly? Who or what is causing them? And more importantly: what could ultimately quiet the troubles?

The troubles didn't start reappearing until Haven's newest resident, Former FBI Agent and now Haven police detective Audrey Parker came to town last year. A lot has happened since then. We've already lost some main characters like the town's Sheriff -- who literally was holding the town together. We've seen insinuations that Audrey was, in fact, the Colorado kid herself those many years ago.

And then there was the whole two-Audrey story line. Certainly Audrey proves a prime suspect for starting the troubles, but she shows so much heart in how she deals with people that it's impossible to imagine her as some kind of supernatural mastermind that's twisting the town apart with unexplained phenomenon. Audrey may be the cause of the troubles, but she doesn't seem to be doing it knowingly.

Privateer Duke Crocker ends up at the center of everything from smuggling and business to, of course, the troubles. Crocker admits his shady past, and we see evidence of it through the introduction of the formerly unknown Mrs Crocker in season two. While Duke Crocker sure seems like an -- alleged -- hardened criminal, I get the feeling he doesn't want to bring necessary harm to anyone. Make no mistake about it, though: Duke always puts his self interests first, and he's always looking for an angle. But is he willing to tear the entire town down? Why would he trust anyone when no one looks out for him? Also there's the pesky little concern of a death prophesy hanging over his head. Duke may be at the center of what's going on but as for him causing the troubles? I highly doubt it.

Interim Sheriff Nathan Wuornos holds his share of secrets, too. For starters the man can physically feel nothing. His past is a stack of lies and he's directly related to the troubles. The loss of the town sheriff and his "father" hit Wuornos hard in season 2, and he's always verging on dark and shady events. He elected to keep Audrey around even with highly questionable circumstances. But for all his interest in the troubles and the town, Nathan never seems aware enough to keep himself out of danger -- and for that I highly doubt his active involvement in causing the troubles.

The constantly mysterious brothers Vince and Dave Teagues run the local newspaper and have access to all sorts of interesting information. While shifty and nefarious most of the time, these two don't seem like masterminds, but rather opportunists as they so stated at the end of season one. They certainly know more than they've let on at this point, so my judgement's still out on these two. (By the way, SyFy created a pair of Twitter accounts for these two characters: @DaveHaven and @VinceHaven -- a great way to keep up with the latest Haven town news.)

Finally, don't forget the ever-creepy town minister, Reverend Ed Driscoll.  This man immediately struck me as a religious nut and a survivalist -- you know, the type you'd find locked away on a compound with 150 brain-washed devotees and and Kool Aid laced with cyanide in the cupboards just in case. The Reverend states he's just looking out for Haven's best interest (while vying for control of the town). But he's been on the wrong end of several trouble-based attacks. So for now he remains a prime suspect.

And what about the characters from season one that we haven't seen pop back up yet, like animal activist Jess Minnon or Marion Caldwell the local antique store owner, or Dr. Julia Carr. Any one of these characters could come back and play a huge part in discovering the cause of Haven's troubles. And that's not to mention Audrey's old FBI boss Agent Howard. He's only been around a couple of times but we already know he isn't who he said he was. Agent howard could very well hold the key to the secrets of Haven and the troubles.

So what are the troubles? Everyone seems to have them. They're like a superpower over which you don't have control given the right circumstances. Mostly the troubles only affect long-term Haven residents, so non-Havenites needn't worry -- so far.

Do you have a theory on Haven's troubles? Do you have a guess as to who is behind everything? Do you know who Audrey Parker is? Jot a comment below and let me know.