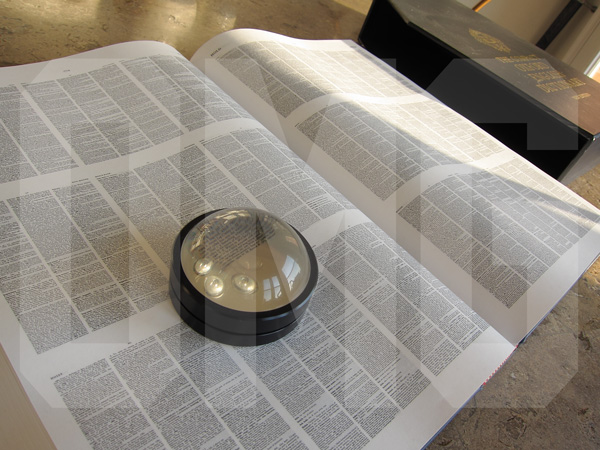 The Oxford English Dictionary is, well, the single standard reference of the English language. Printed, it comprises a 20 volume set that pretty much demands its own bookcase. The one pictured above is Audra's copy, the "compact edition," which literally compresses nine pages of the big version onto each single 11-1/4" by 17.5" page, resulting in a single massive tome weighing in at around 12 pounds. The OED really shines online, though, where it receives updates every three months. And the last few updates have been quite geek friendly, including words like "woot," "follower," "retweet," "auto-complete," and even "sexting."

The folks at Wired rounded up some of the geek lingo that made it into the most recent updates, noting that it's not all sweetness and light. Also included is "cyberbullying," defined as "The use of electronic communication to bully a person, typically by sending messages of an intimidating or threatening nature."

Around the GWC studios, Audra's OED serves as arbiter of all word games, as well as a killer reference for ordinary language. Besides definitions, the OED offers each word's etymology -- the history of the word, from when it was first used through its various iterations over time. It's a fascinating read, as many words feature as sordid a past as soap opera characters. It's also quite intimidating when slammed down on the table ("boooooom") after you challenge Audra's Scrabble play.

You can keep an eye on some of the new additions to the OED yourself (as well as read some interesting essays on words and their histories) by watching the OED what's new page. But the dictionary itself is far from free. Personal subscriptions start around 215 GBP/year plus VAT. Your best bet might be to check with your local library or college, which likely has a subscription you can use. Or you can ask to see Audra's copy at next year's meetup. If you're not inebriated (and promise to be careful) -- or end up playing Scrabble -- it might make an appearance.

(via Wired via The Telegraph)