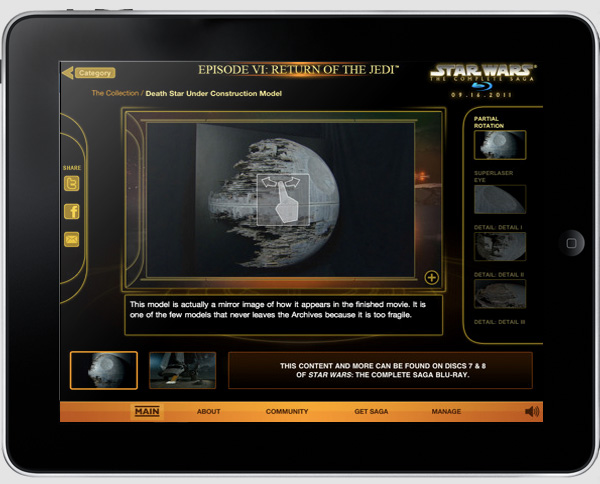 Though the BluRays don't release until September 16th, Twentieth Century Fox released an iPad app which they claim offers "a varied sampling of bonus materials featured in the collection including never-before-seen content sourced from the Lucasfilm archives." Admittedly, it seems that all the cool stuff in the app will be available on the BluRays when they hit shelves. So if you're planning to buy them maybe it makes sense to just wait. But if you're not planning to spring for the new collection, this might give you a bit of fun -- for a hell of a lot less cash. In fact, it's free.

Reviews via the app store are predictably acerbic, with the two reviewers bitching that the app contains only thirty minutes of bonus materials and the third bitching about their reviews. But hey -- it is free, right?

Honestly, what I'd really like to see is something more like Disney's Second Screen app, which can sync up to the movie by sampling the sound in the room with the iPad's mic, then display bonus information in real time. The advantage of Second Screen is that it leaves things like bonus video to your big-screened video player, choosing instead to provide textual and graphic supplements that both really enhance what you're seeing on-screen and pretty dramatically enhance the replayability of the original content. If you're the type of person who wants to watch the movie silently to get everything, then watch it with commentary, then watch it with friends, Second Screen adds at least one more go-round to your viewing process. Plus, imagine what Lucasfilm could bring to the table in terms of that kind of bonus material!

BTW: I just noticed that they released an iPhone version of the app, too. Kudos for not leaving out the non-iPad crowd.