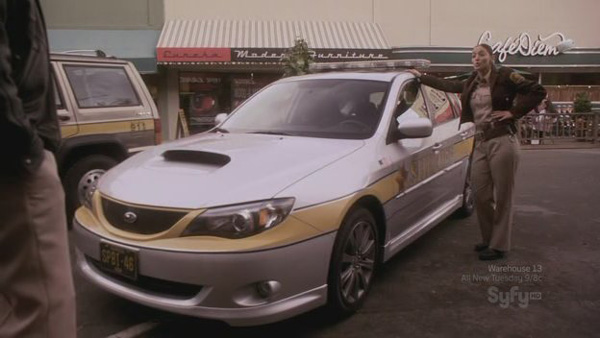 Our friends over at Slice of SciFi picked up on Eureka producer Amy Berg's tweets, explaining the reasons behind the show's cancellation. From their news piece:

"Everyone is asking why [the show was cancelled]. It's simple, really. We are the network's golden child in every way, except for profit margins. Fact is, Eureka is an expensive show to make," she said on Twitter. "We could not maintain the quality of our show with the cuts it would take to make us profitable for Syfy's new parent company." Berg went on to say that Syfy wanted to renew the show and worked to try to make that a reality. But in the end, that didn't happen. "Trust me, they love us," she said. "We just couldn't make the numbers work."

If that's the case, does this mean that a Chuck-like push to existing and potential advertisers might indeed have a hope of saving the show?

For non-Chuck fans (or those who just don't remember), Chuck teetered on the edge for quite some time as fans rallied to save the show. What finally pushed NBC off the fence was a full-scale blitz on one of the show's advertisers, Subway. Save Chuck participants skipped the letters to executives and instead petitioned with their cash, buying Subway sandwiches every day. Eventually, Subway got in touch with NBC and Chuck was renewed -- with Subway as a major sponsor.

Of course, Eureka might not fit the Save Chuck mold. A caller recently outlined Eureka's major advertisers (Save Eureka #2) and also posted the list in the GWC forum. Problem is, he hasn't been able to identify a single large sponsor yet, except Subaru. And though I'd love to pick up a WRX STi, buying a car each week might not be the easiest task for fans. Others think this model might not work for other shows, either. As Ad Age points out, Subway already had a larger relationship with NBC, advertising on everything from Sunday Night Football to The Biggest Loser.

Still, news that Eureka's cancellation might've been purely budgetary leaves us some hope. If you'd like to join in the fray, jump into either of the threads behind our Save Eureka podcasts and throw out your ideas. Or call them into Save Eureka directly at 214-296-9229. We'd love to play your call in a future podcast.

One Response to "Cost Kills Eureka: A “Subway-style” Opportunity?"