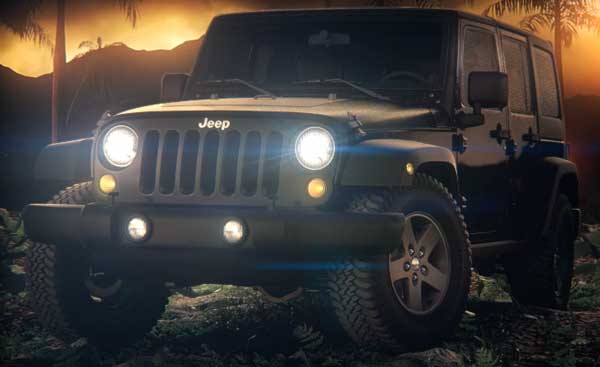 It surprises us not at all now to see in-game product placement -- like, for example, hopping in a specially-designed street vehicle to outrun enemies in a military FPS. But Jeep's turning that upside down, offering an in-game vehicle IRL. It's called the Call of Duty: Black Ops Edition 2011 Jeep Wrangler, and besides offering a seriously cool way to show off your love for the game, it also looks like a pretty sweet ride. Or, as Jalopnik calls it, "the ultimate accessory for some Call of Duty cosplay."

I saw one of these on the road today, and at first I just thought it was a relatively well-tricked-out Jeep -- at least until I saw the slick little logo in front of the door.

At first I assumed some guy carefully put it together on his own, but some quick Googling shows it to be a Jeep-direct offering. When you tick the CoD:BOE option -- on either a two door Wrangler or a four door Ultimate -- Jeep adds upsized, custom wheels and tires, suspension, tail lamp guards, a winch, and a whole bunch of other off-the-shelf options, plus standard-black paint and (of course) the cool logo.

Expect to lay out around $31,000 for the cheapest model. That's a pretty big spend compared to the $22k entry price of the Wrangler Sport. But if you were already considering, say, a similarly-well-equipped Wrangler Sahara, you're only talking an additional $3,500 or so.