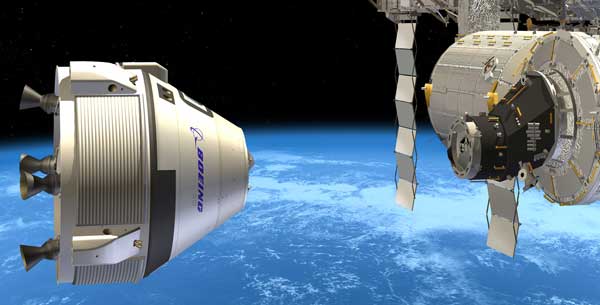 I'm a huge fan of NASA, which is why I love the recent shift away from NASA-as-shuttle-service to NASA-as-science. Assuming that this isn't just a smokescreen to hide ditched funding, it makes perfect sense to me. Let commercial entities handle shipping things. They do a great job of it here on Earth, and there's no reason they can't do it in space, too. If the end of the Shuttle program pissed you off, I'm guessing it's not because you just love the Shuttle and see it as the end-all of space vehicles, but rather because we don't have a suitable replacement. I mean, if Rutan can get us (suborbitally, at least) into space on a shoestring sub-$10 million budget, what can a company like Boeing do with real cash? Answer: The CST-100.

We've known about the CST-100 for a while, but this week's crew announcement shows us just how close Boeing is to putting this craft into space. According to several sources, Boeing says they're not looking to NASA's astronauts to pilot their new craft, instead going the Rutan route and selecting from within their own ranks of corporate test pilots. Even more significantly, the announcement shows Boeing's intent to launch a manned crew into orbit -- docking with the ISS, in fact -- in 2015, assuming the success of two unmanned test flights.

As you can see in the rendering above, the CST-100 is pretty much an upscaled and modernized version of the type of capsules we shot into orbit during the Apollo program back in the '60s and '70s. Upscaled, indeed: The CST-100 can carry seven people into orbit, making it a perfect crew-carrier for the ISS. And it's somewhat launch-platform agnostic, purportedly compatible with the Atlas V, Delta V, and even the commercially-developed (and recently successful in an unmanned orbital test) SpaceX Falcon 9. (The 2015 launch vehicle would ride aboard the Atlas V.)

This is good news, folks. We might not be able to bring back satellites any longer, but America will put people back in space on our own again -- and relatively soon, too.