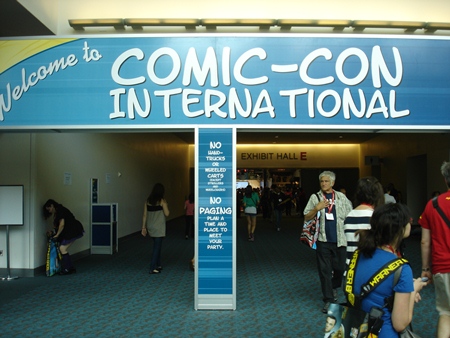 For five days my feet touched the holy ground of San Diego Comic Con 2011 geekness. Short of working in SyFy's Vancouver-based studios or being on set filming the next Tron: Legacy, Avatar, or Star Trek-type movie, this is the closest I will ever come to geek-topia. The friends were phenomenal, the panels were funny and full of information, the cosplay was food for the geek soul, and the exhibition floor was the neverending hall of "I want it all." I came away supercharged for the next year of scifi, and I'm happy I had the opportunity to attend.

SDCC is more than just the panels you see on YouTube or the coverage on G4. SDCC is a total geek experience. It's fun. It's engaging. It's creative. It permeates all of your senses. It allows you to relive past material and it excites you for upcoming or new material.

I had no idea how large the San Diego Convention Center was as we walked up to it Wednesday night. As we entered the Exhibition Floor I turned to the left and only saw a few rows of booths. I was underwhelmed. Then I turned around and I could not see the other side. It seemed like a mile long and three city blocks wide. It was massive and full of vendors and displays. I was overwhelmed from that moment on until I left SDCC on Sunday.

Comic Con seems bigger than life. Hall H seats 6 or 7 thousand people alone. Ballroom 20 seats around 4,500. The Indigo ballroom in the Hilton next door seats a few thousand, and there seemed to be a dozen other smaller rooms that seat several hundred. All have panels going from ten in the morning until early in the evening. And the panels were fun! Camping out early in the morning for a chance at a good seat for some of the bigger panels can be fun, too, if you come prepared and are with good friends.

Being there with friends elevated the experience from awesome to extraordinary. Special thanks for the endless handholding go to Bkittysd, TheHubSD, Topgun, and LadyD. Thank you for making my first scifi convention and in particular my first Comic Con go so smoothly. Thank you Raemani, Chuck, and Audra for spending so much time with me both during and after the con. Friends filled the gaps while waiting in line early in the morning, at night after the convention and sharing in the experience during convention activities. I came away from SDCC electrified with Men In Black 3 awesomeness and Terra Nova excitement. I saw Stan Lee in person for the first time in my life. I shared in the emotion of the TV series Chuck as the cast said one last SDCC goodbye to their fans. I saw Ridley Scott live from the other side of the world via VTC as he was shooting Prometheus on location. I got fired up to see my favorite Hollywood actress, Olivia Wilde, to star in yet ANOTHER movie, In Time. I became an instant Torchwood fan despite having never seen the series before. I was reunited with the Walking Dead. I laughed so hard I became hoarse during the Big Bang Theory panel. I saw in person what a total class act Colin Ferguson is, and how much fun the entire Eureka cast is. And I observed how Allison Scagliotti can light up a room just with her smile, let alone her sharp geek mind. On the floor I saw a 2011 Slave One and CLU Lightcycle Hallmark ornaments. I saw a 2012 DeLorean ornament too. I saw a giant Optimus Prine. I saw a giant Voltron. I saw not one but TWO Back To The Future DeLoreans. I saw a Total Recall flying car outside the Convention Center. And I saw a giant GI Joe playset. For the first time in my life I was introduced to a plethora of cosplay. I saw TWO sets of Xena and Gabrielle. I saw a female Darth Vader in a form-fitting costume that turned every head in the Convention Center. I saw superheroes of every kind and many armored Halo or Star Wars suits. I even discovered what my secret favorite was that surprised even me.

While everything was not perfect, I thoroughly enjoyed my experience. Ninety-five percent of the convention workers and volunteers were a dream to deal with and always had a smile on their faces. I do think scheduling for the bigger rooms and pre-sales for tickets next year could have been done better. I also would have preferred more promotion for more movies next year that I would have been interested in. But a viewing of Captain America with some fellow GWCers Saturday night created a deep desire in me to see The Avengers next year.

The highest praise I can give to SDCC is to say that I am looking forward to going back next year if I can afford it. It was simply good for my geek soul. And that graduate exercise I spoke about in my previous SDCC post? I passed it with flying colors.