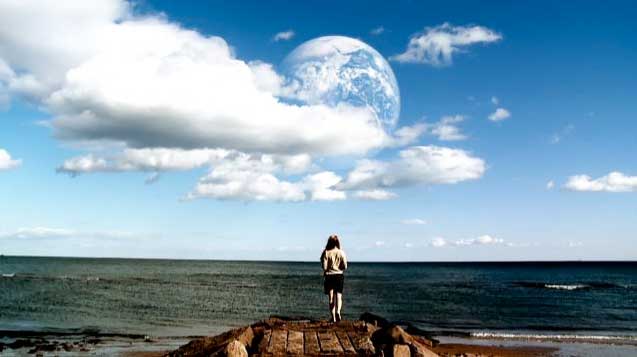 Audra and I ventured down to the Angelika this week to check out an indie sci-fi flick about which we'd heard good things: Another Earth. Penned by the director, Mike Cahill, and the lead actor, Brit Marling, Earth tells the tale of "an ambitious young student and an accomplished composer" whose "paths cross in a tragic accident on the night of the discovery of a duplicate planet in the solar system."

Cahill, from a video interview: "I love the fact that audiences will not get what they're expecting... You see the concept--this other Earth and this thing. It feels like a certain thing. Is it sci-fi? Is it a drama? Is it minimalist sci-fi? Is it a story of redemption?" By Sean's classic definition, it's sci-fi simply because it includes modified scientific elements -- in this case, a second, duplicate Earth. But in the film, the alternate Earth serves only as a backdrop to a classic indie-film drama plot. That isn't necessarily a bad thing, either.

Marling plays Rhoda, a young woman newly accepted and on her way to MIT. While driving she hears a local radio announcer talking about the discovery of a duplicate Earth and stares into the sky to see it, plowing into another car and killing the family inside. The bulk of the movie picks up four years later as she leaves prison and seeks to re-establish herself as a person, trying to right her past wrongs--and eventually dealing with the possibility of meeting her alternate self.

Earth isn't without issues. Though some critics compare it to Pi--in that both films focus on storytelling rather than effects, letting their sci-fi elements take a back seat to character development--Earth lacks Pi's clear separation between sci-fi setting and story. Earth leans heavily on radio-announcer voiceovers, TV news shows, and Internet searches to develop the alternate Earth story, drawing viewers' attention away from the characters and their plight. And Earth's sci-fi premise doesn't hold up well in the limelight: Beautiful shots of "Earth 2" (sorry, Amblin) in the sky like the one above made me wonder why the sea wasn't raining down on Rhoda. (Tides, you know.)

But Rhoda's story definitely strikes home. We all fantasize about fixing our past mistakes, and Earth's new take is interesting. What if we met an alternate us? Would we be different? Could we learn from talking to ourselves? If you're a fan of indie film, you'll enjoy Earth. And it never hurts to support indy sci-fi at any level.

4 Responses to "Indie Sci-Fi: Another Earth"