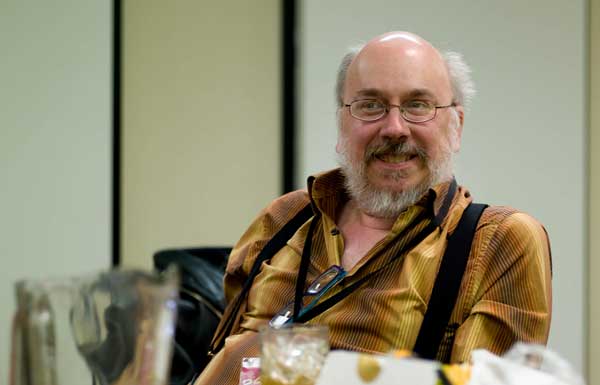 Behind The Mic: Dr. Henry Jenkins

In this week's Galactic Watercooler podcast we aired an interview that Audra and I did with Dr. Henry Jenkins. He's an incredibly interesting guy, both to academics and fans. In fact, he calls himself an "AcaFan"--a hybrid of the two. From the "about" page of his website, henryjenkins.org:

Textual Poachers and much of my subsequent work has been written from the perspective of an Aca/Fan – that is, a hybrid creature which is part fan and part academic (hence the title of this blog). The goal of my work has been to bridge the gap between these two worlds. I take it as a personal challenge to find a way to break cultural theory out of the academic bookstore ghetto and open up a larger space to talk about the media that matters to us from a consumer's point of view. This philosophy has governed my various stabs at journalism and public advocacy, and they are what has motivated me to develop a personal blog.

GWCers will recognize his book Textual Poachers, which came up in our geekdom arc (Part 1, Part 2) helping us understand the differences between how artists and fan communities view art.

Dr. Jenkins has penned numerous other books, too, including Convergence Culture (which "returns to this question of media audiences and participatory cultures at a moment where fans and fan-like activities are absolutely central to the way culture industries operate") and Fans, Bloggers and Gamers (which "maps the transition between the world described in Textual Poachers and Convergence Culture"). He founded the Comparative Media Studies program at MIT, and now calls Los Angeles and the University of Southern California home. Dr. Jenkins' geek cred runs just as deep. He wrote and lectured quite a bit during the run of Lost, and even portrayed a Klingon for the 2009 Star Trek (sadly ending up on the cutting room floor).

Dr. Jenkins took time out of his busy post-Comic Con schedule to sit down in person with Audra and me, kindly explaining his views on Pottermore, expanding on an awesome post he wrote a few weeks back. If you're a Potter fan--or just enjoy the series--this is a must-listen, as he does a great job of concisely laying out not just why Pottermore is significant to the world of transmedia study, but also why we as fans should be concerned about it--and enjoy it.

He's extremely personable, too, fielding all the questions we had directly and in an informative manner. I really wish I'd left the mic open longer as we continued the discussion for a while afterward. Talking with Audra about her studies, he pointed out some very interesting applications of transmedia throughout history, noting that transmedia study isn't limited to the modern era. Maybe Audra will jump in with comments on the specifics.

Anyway, this interview was a lot of fun. We hope you enjoy it as much as we enjoyed recording it.

(Thanks, Joi, for the great CC-licensed photo.)

One Response to "Behind The Mic: Dr. Henry Jenkins"