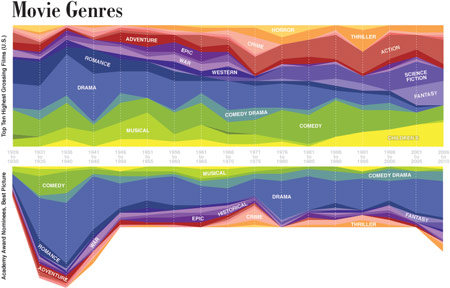 The human mind can recognize patterns that remain invisible to even the most powerful computers. But we're stuck with some nasty limitations. We can only see relatively small amount of "raw" data at a given moment. That's where visualization comes in. By laying out data visually, we encode data into additional channels. When we look at a visualization, we see dramatically more information than when we look at a page full of numbers. And we can see new patterns.

Take, for example, the graph above. (Or better yet, take a look at the large version in its native home, VerySmallArray.com.) What do you see?

First, I see confirmation of some things I've suspected for a while.

Dramas don't pay, but we still recognize them as art.

From 1926 to 2010, with only a few brief exceptions, drama has accounted for a consistently decreasing percentage of the top ten highest-grossing films. By 2008 it seems to account for almost none. Yet drama films receive a surprisingly consistent number of Academy Award nominations throughout the last century.

What does this mean? It could indicate a deepening separation between the Academy and the theater-going public. Or maybe as movie studios amass more data to predict what the public wants, they're able to spend their money wisely, targeting large-budget flicks to mass audiences and still courting the Academy with drama.

What can the data hide? It's important to keep in mind that the top half of the graph represents the percentage of films in the top ten grossing, not the cash itself. Thus it's possible for 50 additional drama films to fall outside the top ten in the 2008 to 2010 range, account for as much or more cash, and still not show up at all on this graph.

Science fiction and fantasy are big earners in the last decade.

Starting in the early '70s, science fiction begins to gain ground in the top ten grossing category. And though it's on a short decline since 2001, fantasy has taken off to fill and exceed any gap from the loss. Consider that sci-fi accounts for only a sliver for the first 50 years of the graph and fantasy doesn't even seem to exist graphically until 1951. Finally, while the sci-fi/fantasy genres finally seem to receive a few Academy nominations starting in the '90s, they still (surprise!) receive the shaft award-wise.

What does this mean? It could indicate that sci-fi and fantasy are going mainstream and tapping large audiences -- or at least audiences with deep pockets. It's also interesting that while sci-fi's expansive crux seems to fall around 1971, fantasy's seems to lie around 2001 -- not surprisingly with the Lord of the Rings trilogy's start.

What can the data hide? While these films might draw high gross cash, they aren't necessarily the most "popular" films. It might be interesting to compare, say, Google search hits on the film's names or other "buzz" indicators to see how they really rank. Just because we pay to see a movie doesn't mean it's our favorite. Witness Avatar, which some of us love and lots hate.

Pixar is a serious cash factor.

Children's movies have garnered an almost linearly-increasing percentage of the top ten grossing flicks since 1981, and in the graph's latest time increment they represent one of the largest categories.

What does this mean? The growth of kid's movies (at least in the top ten grossing) coincides almost exactly with the beginnings of home video, and the most steady growth occurs around the time that sellthrough VHS tapes became available. Could this entrenchment in the home account for our need to see these movies in the theater?

What can the data hide? Note that the graph assigns movie genres based on "the first genre listed for each movie at allmovie.com." So an action children's flick is an action movie, but a children's drama is classified as "children's." It might be worth spot-checking a few of these.

Seriously, this graph continues to fascinate me the more I look at it. If you've got a few minutes, take a look at some of VerySmallArray's other visualizations, including this one graphing movie budgets over time. It's an awesome (and stimulating!) time suck.

4 Responses to "Knowledge Through Visualization"