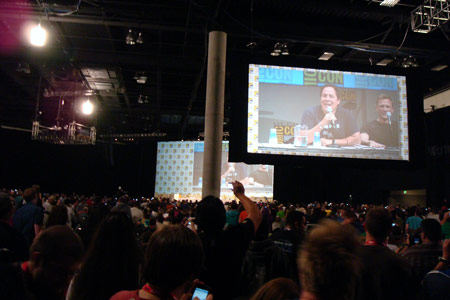 The Operator sent over an interesting article this morning from Slashfilm pointing out that we'll get a Cowboys and Aliens screening at San Diego Comic Con this year (woot!) and noting that some studios are planning to "skip" the 'con of 'cons this year. Specifically, "Warner Bros., Disney, and DreamWorks aren't bringing films to the show this year" and "Marvel is trying to decide whether to do a big panel in 2011."

Of course, the headline is bait. Read on into the article and Slashfilm points out what I'm sure some of you are already thinking, specifically:

In short, last year was an uber-year for SDCC when it came to studio participation, but this had less to do with changes in the 'con than with the fact that the stars aligned for an Emperial (think Vader) crapload of releases. This year, not so much.

Slashfilm, of course, wonders a bit about whether or not SDCC might be "losing some of it's luster" as the fairy godmother to film/TV releases. In the past, courting SDCC crowds has helped kick projects over the top, creating an early buzz that spreads. Think of the SDCC crowd as what the marketing folk call "influencers." Those willing to travel thousands of miles and endure long lines to find out about the latest coolness will likely take it home to their friends -- friends who'll likely look up to them as "experts" on the material.

This is marketing gold, and there's some truth in it. When I attended SDCC last year, I got a big kick out of sitting in Hall H and Ballroom 20 while panel after panel of showrunners, directors, stars, and other gurus pitched their work to me, essentially pumping me up with an exciting inside take on almost everything I'd enjoy in the next year. For most of the year I continued to be surprised when the local geekerati jumped on the "next big thing" it was actually something we'd seen at SDCC the previous summer.

But let's be clear: taking material to SDCC has never been a sure thing marketing-wise. If we like it, we like it. If not, well, not. SDCC is simply a great venue for pitching to an interested (and let's face it, pretty captive) audience. I think of it a lot like the interviews in Rolling Stone: they're so interesting and intimate that you often find some common ground even with people of whom you're not really a fan. For example, I might not have thought twice about Cowboys and Aliens until the inevitable massive marketing campaign kicks in, but after hearing the pitch, I'm fascinated.

Early on in the C&A panel last year, Favreau responded to a question about why C&A wouldn't be released in 3D. Sure, he made the requisite hipster-satisfying anti-3D cracks, but then he pointed out that the real reason they weren't going the 3D route was because he wanted to shoot on film in order to capture the classic western grittiness. Like many, that smacked of BS to me... until he rolled the ~10 minute preview he'd shot just for SDCC. It was indeed gritty. With spaceships. And it was badass. I've been waiting impatiently for the flick ever since.

Which is why I hope I make it into the screening this year. Of course, if I don't, I'll be on it like stink on a bantha when it wide releases shortly thereafter.