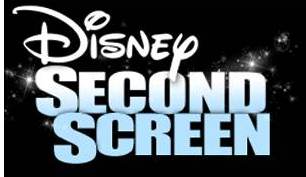 I'm usually one to be completely engrossed in watching a movie at home. In fact, to make sure I hear the dialogue correctly, I usually turn on the closed captioning. But with a movie or franchise I'm really interested in, I know I'll be watching the movie over and over again, like the obsessed geek I am. I'll watch the movie, the commentaries if they're available, and the included special features on the DVD or Blu-ray -- then I'll listen to podcasts that discuss the movie. This week I discovered a new way to geek out over a movie with more in-depth material than I've seen before: Disney's Second Screen.

Disney's Second Screen is an app for your iPad or computer that can audio-synch with the movie you're watching and display real-time content via the web to your device. You simply start the app, type in the "Magic Code" which comes with your DVD or Blu-Ray version of the movie, choose "Audio Synch," and let the electrons do the rest. With the Tron: Legacy Second Screen you see production notes, story boards, CGI work in different stages, blue screen sets, text commentary from producers, designers, and actors, and much more. It's truly a multi-tasker's dream come true, and both an unprecedented and timely innovation for those of us who want to dive head-first into our favorite films' complementary media. And for those of us who process information a little slower or want to examine the art at a more leisurely pace, you can always go into the Second Screen app and browse at your leisure without the synch running.

So far, Disney only has released Second Screen content for Tron: Legacy and the classic film Bambi, but undoubtedly many more will come in the future. I also foresee other companies following Disney's lead with this sort of real-time online additional content. Second Screen is a great way to track movie interest and encourages the purchasing of a code instead of pirating digital content.

My recommendation is to pick up a copy of Tron: Legacy or Bambi and check out Second Screen. It will definitely be worth your while.

Have you tried out Second Screen? Let us know what you think! What's your favorite way to view a movie's expanded content? Leave a comment below or catch me on Twitter at @ShooterGWC.