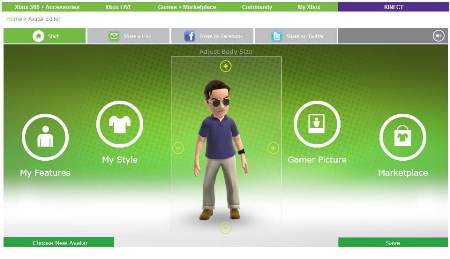 Waiting for the Xbox 360 Halo Limited Edition Bundle to be delivered is driving me crazy. Fortunately, Microsoft set up things so I can keep myself busy online at xbox.com while I wait. Last time I described how I choose my Gamertag when I set up my Xbox Live Family Gold Pack (see my post Grabbing a Great Gamertag). While cruising the xbox.com website after I purchased the Gold Family Pack and set up my Gamertag I noticed I could also set up my Avatar. I'm no artist or graphic designer, but it turns out Microsoft made creating my avatar as easy as pie!

In all honesty I'll probably have Mrs. Shooter, Shooter Jr or one of the girls help me refine my avatar once my Xbox arrives in the mail, but I'm pretty happy with what I came up with. The avatar editor was very user friendly and had options that were pretty close to what I looked like. I've never used Photoshop or any other graphic design package. In fact, the extent of my design experience is limited to early CAD modeling packages and Microsoft PowerPoint slides. So I was pleasantly surprised by how easy it was to come up with a half-decent avatar on my first attempt.

I decided to try and make my first avatar a self-portrait of sorts. The avatar by no means needs to look like yourself. You could be Kermit the Frog, Isabel the Barmaid or the Steroid Built Ivan. Maybe I'll try all of those out someday. But for now my avatar would bear a resemblance to the face I see (or perhaps just want to see) in the mirror every morning.

In order to create the avatar I moved into the "My Features" portion of the Xbox Live Avatar Editor site. The user interface was self explanatory and very easy. I started with selecting my hair style and moved right into eyes, eyebrows, noses, mouths, and chins. Out of that bunch the only choice not very close to what looks like me is the mouth.

Next I moved unto apparel and decided on a shirt, slacks and shoes that looks like something I would wear. Since Mrs. Shooter usually dresses me I know these will be the first to go when she gets her chance but it's what I would buy on my own so I chose it. I also accentuated with a wedding ring, a digital watch (a Shooter signature) and sun glasses.

I finished with taking my gamer picture. I tried a few different poses before settling in on one that looked arcade cool, but yet able to dismantle an enemy without too much issue. I selected the Gamerpic and GopherGooGuru was now complete.

I did venture into the Marketplace and saw a couple of neat items I might want to purchase for my avatar. The little Remote Control Mass Effect Mako looked awesome and so did the Mass Effect N7 sweatshirt. But I wanted to wait before spending any more cash on the account until I could use it more often. So the only thing left to do now was to impatiently wait for the delivery of the Xbox bundle.

What do you think of the Xbox Live Avatar Editor? Do you use a self-portrait avatar or have you created a gaming character? Do you have any suggestions for using the Avatar Editor? Please leave a comment below or catch me on my Twitter account @ShooterGWC.