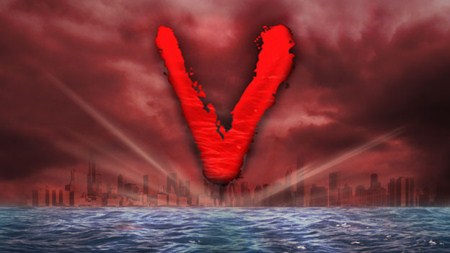 Will V stay on my TV?

In the fall of 2009, there seemed to be an endless number of continued and new television shows Shooter Jr and I were looking forward to watching. Eighteen months later, it is a very different landscape on our DVR and TV Guide. Granted, there are still some great shows left but there a quite a few empty holes that will be difficult to replace. In the wake of the SyFy cancellations of Caprica and Stargate Universe in late 2010, I find myself wondering if ABC's V will be able to survive for another season in the 2011-2012 timeframe.

The Stargate Universe cancellation hit me hard. To date my official response to the SGU news was and will continue to be "nuts." The Stargate franchise was very close to supplanting the Star Trek franchise as the most favorite franchise to me ever. Eventually, Stargate may yet be able to attain that status with me. And I even realize that SGU was a slow starter and a dark Battlestar Galactica clone, but just when the storyline was finding itself and presenting an overarching Stargate-Ancient theme and plot, the series and franchise was ripped out from underneath us. I had thought that SyFy would have been able to continue its (arguably) best performing television franchise even with low ratings, especially with the main storyline change. I was wrong, and because I was wrong about SGU, I now am questioning whether any high budget science fiction type television show can survive in today's entertainment climate.

The list of canceled scifi-type television shows over the last two years is long. Some of them off the top of my head are Heroes, Caprica, Stargate Universe, Knight Rider, Life on Mars, Defying Gravity, Dollhouse, The Sarah Connor Chronicles, Flash Forward, and Flash Gordon.  Admittedly, the quality of these shows varied from poor to fantastic and some of them were doomed to cancellation no matter what the circumstances. But that is still a lot of shows to not be renewed. I haven't researched the numbers to compare the total number of shows canceled versus the number of scifi-type shows canceled, however, I do know that there are a lot more scifi shows to cancel than when I was growing up (late 80's to mid 90's).

Also, there are a lot of geek shows still on television. Some of those shows off the top of my head are Haven, V, Chuck, Big Bang Theory, Warehouse 13, Sanctuary, Eureka, Burn Notice, Dr. Who, Venture Bros, the Walking Dead, and Futurama. All of those shows are on my DVR list on both of my DVRs, but I miss having a true space based scifi show. Unless V takes us off Earth to the V home world, I just don't even see any opportunity to have a true space battle in the coming years save the Battlestar Galactica prequel Blood and Chrome.

So basically, the only show of the spaceship genre left with future possibilities in the winter/spring of 2011 is V. V is currently airing on ABC, the same network that canceled Flash Forward and Defying Gravity. Additionally, since V did not air in the fall of 2010 there are no recent ratings to really figure out of V will pull viewers from its previous season. In it's first season, V debuted to 14.3 million US viewers in the fall of 2009 and fell to 5.8 million US viewers by the end of the first treason in May 2010 despite being aired immediately after the hit show Lost. And at the time I'm writing this blog post V has not yet aired in 2011. But on the heals of SyFy's cancellations of Caprica and SGU as well as last year's ABC cancellations of Flash Forward and Defying Gravity, I am going into V's new season as cautiously optimistic.

Will V stay around? Do you have comments about the list of geek/scifi shows canceled in the last two years? Is there room for big budget scifi/geek shows to have 5-7 year runs on broadcast or cable television today? I'd love to read your comments below, or feel free to contact me on my Twitter account, @ShooterGWC.