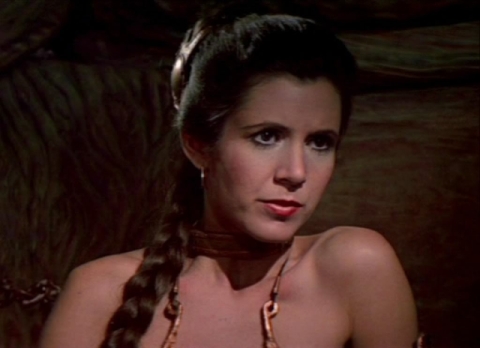 An Examination of Slave Leia

In 1977, George Lucas modeled his space opera after the matinee adventures he watched as a child. Buck Rogers, Flash Gordon, and Zorro were all garnished with damsels in distress. Beautiful women placed in peril allowing the male hero to rescue them and save the day. The hero fought off armies of foes while the damsel sat by idle, an inanimate object with no power over her own destiny.

Princess Leia redefined this stereotypical damsel in distress. While in captivity on the Death Star, once an opportunity arrived, she grabbed a blaster and acted. Blasting a hole and creating an avenue of escape she commanded, “Into the garbage shoot, flyboy!” By doing so, she opened the door for future female characters like Ellen Ripley and Sarah Connor to take the reins and save everyone’s collective ass.

However let’s take a step back. She may have graduated from totally helpless but she was still a prize to possess. In Star Wars, she was taken to the castle fortress Death Star and held in its fortified walls. In Empire Strikes Back, she was the jewel of Cloud City and used by Darth Vader to lure Luke. In Return of the Jedi the dragon Jabba the Hutt displayed his bling-bling Leia in his lair.

These polar opposite attributes allowed her character to be both vulnerable and a force to be reckoned with. Burdened with the responsibility of the rebellion, she still sought the comfort of Han’s embrace. Sprawled upon Jabba the Hutt, captured and humiliated, Leia held a regal grace. True to form she faced another struggle with fortitude awaiting the moment to strike and escape. She harnessed her chains of bondage as an instrument of freedom and vanquished her foe. Leia Organa was a graceful, exposed, tender, guarded, lethal, and formidable character.

On the other hand, the phenomenon of Slave Leia transcends this character. Now an enduring staple of SF/Fantasy conventions, Slave Leia piques the fetish fantasies of fanboys and allows fangirls to dabble in exhibitionism. The costume has made several appearances in pop culture and could be considered the epitome of geek sexploitation. Does this homage demean the dignity of the character or express the prowess of femininity in spite of exposure?

Without getting into an objectifying of women debate, let's just agree that if a person shows a significant portion of skin they are going to get noticed. This attention may be scandalous, provocative, or sensual but as sexual beings we can't help being receptive to it. As Slave Leias frolic around convention floors, one more revealing than the next, promoting a bondage fetish and allowing fans a titillating experience. It's easy to see a dichotomy between the character and the sensation it has become.

Let's remember that the SF/Fantasy genre is about exploring intelligent and absorbing ideas in the safety of escapism. Conventions allow this function on a grand scale. It is the one place where a scantily clad woman will be treated with the respect she deserves because of the character she is depicting.

Princess Leia is an amazing character with the ability to balance between being vulnerable and strong. So remember, the next time you're in the presence of a Slave Leia stop gawking and drooling. Force yourself to look deeper, past the abundance of bare flesh. Honor and respect the powerful and majestic woman standing before you.

9 Responses to "An Examination of Slave Leia"