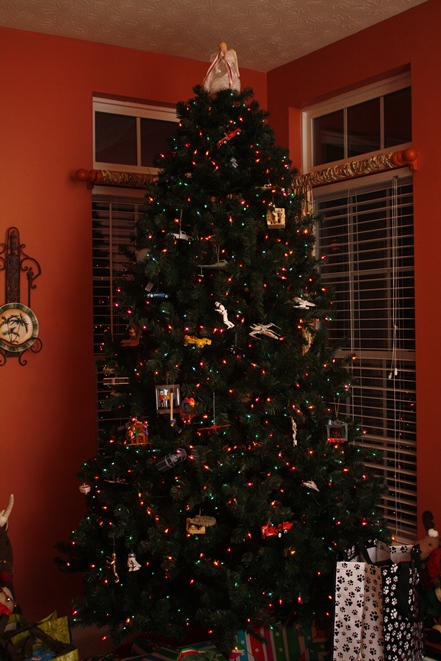 I'm sure just about everyone reading this article has some sort of a holiday tradition. Our family has several and usually includes the boys in the family going to see whatever SciFi blockbuster is out. This year our plans are to see Tron Legacy together. One of our other long lasting traditions involve each member of the family receiving a Hallmark Christmas Tree Ornament in our stockings. My mother, Mom Shooter, has been responsible for assembling this gift each year for the past 20 or 30 years. Everyone has one or two series that they follow from year to year. My father, Dad Shooter, has received the Classic American Car series every year since 1991. The girls usually end up with a Disney series ornament. I have received the All American Trucks series off and on since 2000, but each and every year Mom Shooter makes sure I receive some sort of a SciFi Hallmark Christmas Tree ornament. In fact, our family have received so many Hallmark ornaments that we've had to add a second full-sized tree in our home to handle all of our favorite ornaments. For those of you that follow me on Twitter, you've already seen our "geek" tree, but for those of you who didn't get the chance, here's a little tour of  the vehicle and ship ornaments on our tree. I've been a truck guy all of my life. Before we owned the Shooter Family Truckster, I owned a 1999 Ford F-150 extended cab 4x4 complete with many accessories and a matching shell on the truck bed. The year after I purchased the truck, Mom Shooter understood and started gracing my stocking with Hallmark truck ornaments. To date I own seven of the seventeen trucks in the series, but have plans to acquire the missing ten someday. When the kids finally grow up and leave the home I'll replace the Shooter Family Truckster with a real truck, too. Until then, I'll have to satisfy my truck itch each Christmas with my Hallmark truck ornament series.

If you haven't picked up on it yet, I'm a vehicle/ship guy. I'm an engineer and a rocket scientist. I'm also a SciFi geek. It's what I am. So it's no surprise that my favorite hallmark ornaments are my space ships from Star Trek and Star Wars. While I don't own an entire collection of either series at this time, it is definitely on my list of things to correct in future years. For the past two years my favorite ornament was a tie. On the Star Trek side, it was the 2008 U.S.S. Reliant from Star Trek II: The Wrath of Khan. It was the ship that almost beat Kirk. Once under Khan's control the Reliant's smaller size was within a few moments of a space turn away from blasting the Enterprise right out from underneath an aging Admiral Kirk with an understrength crew of trainees. For the record I would have much preferred an Enterprise, but since I didn't have one the Reliant would have to do. Since 1998 my favorite ornament has been a Star Wars X-Wing. I've never owned the 1996 Millenium Falcon and if I did own it, it would have been my favorite by far. But there is something about that deployed S-Foil single seat fighter that just turns my hydrospanner. Having R2D2 riding shotgun in the back doesn't hurt either. This year the tie for the last two years has been broken, and I have a new favorite. If I ever get a hold of the Millenium Falcon from 1996 or the NCC-1701-A U.S.S. Enterprise from 2005 they will be my new favorite. Until then I will proudly place my 2010"Reboot-style"  U.S.S. Enterprise at the top of my list. I will also place it on my tree in a spot that I will see it first, everytime. Delving into the Dark Side of the force with Star Wars, and as an homage the first piece of Star Wars screen shots I ever remember seeing, I have the 2004 Star Destroyer-Rebel Blockade Runner. Every year I re-enact the opening scenes to the Star Wars franchise in my mind from the time I bring this duo out of the box until we break down the tree. And every time I wonder how the movies would have turned out if the little Tantive IV Blockade Runner had avoided Imperial capture. What do Battlestar Galactica's "Starbuck" and Star Trek: Voyager's Lt Tom Paris have in common? They both built a new class of vessel in deep space. And even though it's Kathryn Janeway's voice that sounds every time you press the button, I renew my respect for the maverick pilot every time I see the self-made hot rod. Probably the third or fourth most iconic Star Wars ship is the Imperial Shuttle. Just looking at it's sleek, angled beauty starts John Williams' Imperial Theme pounding in my head. Heck, most of the time I end up humming a few bars. Oh, and the best part about this Hallmark replica? The wings fold up. Unfortunately this Star Trek Hallmark Ornament replication's wings don't reconfigure as they do onscreen, but the 1994 Bird of Prey looks as menacing on my tree as it does in the hands of a warmongering Klingon. Although most of the time when I look at it my mind envisions the campy use in Star Trek IV: A Voyage home, or the final explosion in Star Trek VI: An Undiscovered Country. Either way, it seemed the little Bird of Prey almost had as much action screen time as the Enterprise did. Who doesn't get a kick out of the two-seat Star Wars Snow Speeder? Another new ornament for the 2010 Hallmark collection, the snowspeeder is like a combination hovertank-supersonic fighter. I've often envisioned myself avoiding holiday traffic and the lack of mall parking by piloting one of these babies. Someday, I sure hope those Rebel engineers figure out how to make them take out those Imperial Walkers without having to resort to bow and arrow techniques. Speaking of the Imperial Walker, in 2006 Hallmark released it's ornament version complete with encircling Rebel Snow Speeder. This dog-walking-like with laser beams on top of its head "tank" looks like it could take on anything and win. Well, except for the old harpoon and cables wrapped around the legs trick. Still, I wouldn't mind test driving one. It is impossible for me to look at this 2009 Hallmark Klingon Battle Cruiser and not see the Kobayashi Maru. Then Kirstie Alley as Lt Saavik. And then a moment later I think of Star Trek The Motion picture. Remember, Klingons don't take prisoners (Kirk's words, not mine) and today is always a good day to die (Worf's words, not mine). Speaking of dying, remember the location of the Emperor's demise in Star Wars? Yes, it was the partially completed but yet fully armed and operational Death Star battlestation. For those that have one and have plugged it into their tree's lights and then have those light come on with a timer, we all know that this ornament's sound file is long, full of effects, and can scare the craaaaaap out of you if it goes on at 5 AM. Remember in Star Trek The Next Generation when the Romulans came back? Here's their ride. We'll see how much their design is reflected in the new Star Trek reboot movies. Do you remember the Star Wars Skywalker Landspeeder toy back in the 1980's? Well, I never had one. However, as of last year I do have the Hallmark ornament. Yea me! That's one small childhood injustice corrected. Since 1992 my Christmas Tree has always been graced with a Star Trek: The Original Series Shuttlecraft and Spock's voice. It just wouldn't be the holiday's without it. For some reason Mom Shooter missed one of the more important ornaments in 1996 and 2005, the Millenium Falcon. In 2007 that mistake was corrected and Mom Shooter brought forth the Millenium Falcon as it is taking off for Mos Eisley space port. Don't get me wrong, this is a most treasured ornament, but the 1996 Falcon is on my most wanted list and will be tied with the 2005 Enterprise-A as my favorites once both are acquired. And the music sound from the 2007 ornament? Nothing short of Star Wars majestic. At the beginning of this article you saw my Hallmark Truck ornament collection. As for cars, my favorite muscle car ever would be the 1965 Pontiac GTO. This year Hallmark released a red 1964 Pontiac GTO and this is as close as I'm ever going to get to the 1965. If I was going to ever own a classic car, the 65 GTO would be it. For now, I'll settle for a 1964 GTO ornament and drive it around the great room once or twice a year. Just like I have my favorite muscle car, Darth Vader had his favorite space fighter. In 1999 Hallmark released Vader's personal sports car, his Tie Fighter. But did we ever find out if it came equipped with a 6 disk CD changer? Perhaps one of the most iconic scifi "hot rods" is the Ghostbuster-mobile. Last year Hallmark released the Ecto-1 and it was the most played with ornament ever in the Shooter house, and everyone got a kick out of hearing the Ghostbuster's theme from the ornament. If I had to pick a sci-fi car to own, it would be a toss up between Ecto-1 and the Back-To-The-Future Delorean. Since Hallmark has never released the Back-To-The-Future Delorean, I'll gladly have the Ecto-1 on my tree. Does the Naboo Royal Cruiser remind you of a silver SR-71? It sure reminds me of one. And it looks and sparkles great on my tree. While I'm writing this article I have not yet seen Tron Legacy. That doesn't mean I don't like Lightcycles. I'm not a motorcycle guy, but I'd gladly take one of these any day of the week and twice on Sundays. This is definitely in my top 5 favorite ornaments. Hallmark had a very good year in 2010 indeed. What's one of the cooler things that can equal a Tron Lightcycle? R2D2. I have three R2 Ornaments. One in the back of the X-Wing, a R2D2 figurine, and one in the side of a Jedi Fighter. This 2005 ornament is so cool Shooter Jr and I each have one. Here's my little R2D2. Released by Hallmark in 2001 this little guy is always on my tree, always in a place of honor, and always chirping away. He is not a ship or a vehicle per se, but he is cool none the less. In fact, if anyone ever wants to sell me an R2D2 head complete with remote control electronics to mount on my Shooter Family Truckster luggage rack, or on top of a pickup bed trunk cover, I'll buy it whatever the cost. It's just that cool. I'll end with the vehicle that I say started it all. In 1997 and in 2001 Hallmark released versions of the Wright Flyer.  Recently, on December 17th, 2010 I had the opportunity to attend the 107th anniversary of self powered, controlled, sustained flight at the Wright Brother's testing grounds, Hoffman Prairie. If you are ever in town and interested in flight, this field is a must see. And for me at least, this ornament is a must have for my geek Christmas tree.

I'm sure there are many other readers that have their own versions of a Geek Christmas Tree. Please let me know about it below in the comments section, or let me know what you think of my current 2010 collect. I'd love to hear about it.