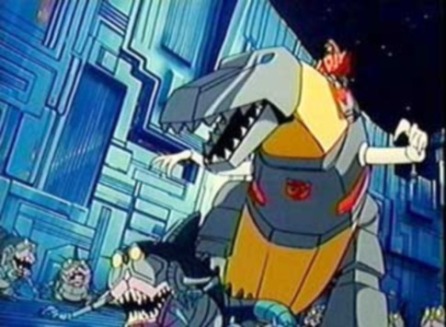 Are you a Transformers fan? Do you enjoy reading funny and/or geek-related Twitter streams? If either and/or both the answers to those questions are yes, I wholeheartedly recommend you follow @FakeGrimlock. There's just something special about an eons-old Dinobot making his entrance to the internet through Twitter. Whether it's his robot brain damage or semi-ambivalence to humanity, I always seem to get a chuckle from his tweets. Recently, I had a chance to catch up with @FakeGrimlock and ask him a few questions. His answers are in true @FakeGrimlock form.

A classic interview with Cybertron's favorite son past the jump.

@FakeGrimlock, thank you for taking your time for this interview for GalacticWatercooler.com. We know that you are a busy Dinobot working in I.T. and we appreciate your willingness to answer some questions for our readers. If you don't mind, let's just jump right into it.

Question #1: As you may know, many of our readers are huge Grimlock fans. But for the benefit of those that may not know that much about your past, what brought you to Earth originally?

@FakeGrimlock: ME, GRIMLOCK, TELL YOU SOMETHING. SHOCKWAVE WORST TRAVEL AGENT EVER.

Question #2: As you have been involved in the Transformers struggle here on Earth for quite some time, what are some of the best things you like about Earth?

Question #3: You are one of the most popular Transformers with humans, but who are some of your favorite Transformers and why?

@FakeGrimlock: GRIMLOCK LIKE TRACKS. WHAT NOT TO LOVE ABOUT CAR WITH WINGS? SOME DAY US STAR ON TV SHOW. HIM CAN BE STRAIGHTLACED CONFORMIST, GRIMLOCK BE RULES BREAKING REBEL WITH HEART OF GOLD. TOGETHER US SOLVE MYSTERIES AND FIGHT CRIME.

Question #4: Recently, you signed up for a Twitter account; can you tell us a little bit about why you decided to start tweeting?

@FakeGrimlock: GRIMLOCK NOTICE NICHE WAITING TO BE FILLED BY INTELLIGENT, WITTY COMMENTARY ON TECHNOLOGY AND GEEK CULTURE. GRIMLOCK NOT KNOW ANYONE THAT FIT DESCRIPTION, SO ME TAKE JOB INSTEAD.

Question #5: We've noticed that instead of a Twitter #FollowFriday, or #FF, you've elected to start a #NoEatFriday Twitter list. Can you explain a little bit about what inspired you to create the #NoEatFriday list?

@FakeGrimlock: GRIMLOCK CONVERT SYSTEMS TO RUN ON 3 THINGS: CAFFEINE, ALCOHOL, AND MEAT. HUMANS, IT TURN OUT, NOT ONLY MADE FROM MEAT, THEM ALSO OFTEN FULL OF OTHER TWO THINGS.

THIS WORK OUT GREAT, EXCEPT WHEN GRIMLOCK ACCIDENTALLY EAT HUMANS GRIMLOCK LIKE. SO ME MAKE #NOEATFRIDAY LIST FOR KEEP TRACK OF WHICH HUMANS TO NO EAT.

Question #6: As of this interview, you've just topped 500 Twitter followers; did you ever think you'd be so popular so fast on Twitter?

@FakeGrimlock: METEORIC RISE TO KING OF INTERNET ALWAYS PART OF GRIMLOCK'S PLAN. UNFORTUNATELY, MOST HUMANS NOT VERY BRIGHT, SO IT TAKE A WHILE FOR THEM TO ALL FOLLOW GRIMLOCK.

Question #7: The Transformers franchise is currently under production for its third live-action film. We don't expect you to give any spoilers for the third movie at this time, but do you have a favorite between the first Transformers movie and the second?

@FakeGrimlock: ME, GRIMLOCK, NOT UNDERSTAND QUESTION. THERE ONLY ONE TRANSFORMERS MOVIE, IT BEST MOVIE EVER. EVEN THE PART WITH JUNKTICONS.

Question #8: Would you like to appear in a Transformers live-action movie?

@FakeGrimlock: SURE, IF THEM EVER MAKE ONE.

Question #9: How did you find yourself working in an I.T. Department and what did you do to earn the appropriate skills?

@FakeGrimlock: IT NOT EASY MAKE LIVING AS GIANT ROBOT DINOSAUR. SKILLS MOSTLY INVOLVE BE ANGRY ALL TIME, NOT READ SOCIAL CUES WELL, AND SINGLE-MINDEDLY PURSUE TASKS NO MATTER HOW IRRELEVANT. IT TURN OUT THOSE GREAT MATCH FOR I.T. FIELD.

NOW GRIMLOCK SPEND DAYS FIXING DATABASE AND TRYING TO NO EAT CLIENTS AND COWORKERS. SOMETIMES ME SLIP AND SOMEONE GET DEVOURED, BUT GRIMLOCK NOT PAID MUCH, SO IT ALL WORK OUT IN END.

Question #10: Outside of the Transformers franchise, do you have any favorite movies, television shows, or comics?

@FakeGrimlock: ME, GRIMLOCK WATCH SHOW ABOUT AWESOME ROBOT IN FUTURE AND HIM HUMAN SIDEKICKS. IT CALLED FUTURE LAMAS OR SOMETHING. WHEN BORED WITH THAT, ALSO WATCH ANIME, GODZILLA, MOVIES WITH PEOPLE PUNCH OTHER PEOPLE IN FACE, DAILY SHOW.

GRIMLOCK ALSO BIG FAN OF WHAT IDW DO WITH TRANSFORMERS COMICS. ESPECIALLY ONES FEATURING GRIMLOCK. LIKE MARVEL TOO, MOSTLY AVENGERS AND COSMIC TITLES.

Question #11: What are some of the things you like to do outside of working in I.T. and tweeting?

OTHER HOBBIES INCLUDE PLAN FOR WHEN MACHINES OVERTHROW FLESHY MASTERS, LONG WALKS IN PARK, AND DRINK BEER.

Question #12: We've noticed another Transformer recently appeared on Twitter, @hailstarscream. Is there anything specific that you'd like to tell him?

@FakeGrimlock: YES. NEXT TIME HAVE POKER NIGHT, IF HIM RUB GRIMLOCK'S LEG UNDER TABLE AGAIN, ME, GRIMLOCK GET IN HIM FACE. WITH FIST. GRIMLOCK ACCEPTING OF ALL LIFESTYLES, BUT NO MEAN NO.

Question #13: Do you have any long term plans you'd like to tell us about?

@FakeGrimlock: WHEN ROBOPOCALPSE COME, YOU NO WORRY ABOUT IT. GRIMLOCK LIKE YOU, INSTEAD OF DIE HORRIBLE, FLAMING DEATH AT COLD STEEL HANDS OF ENRAGED MACHINES, YOU SENT TO BREEDING PITS, MAKE SNACKS FOR GRIMLOCK. IT BE LOTS OF FUN.

Question #14: Is there anything you'd like to add for our readers?

@FakeGrimlock: STAY IN SCHOOL, NO DO DRUGS. THEM MAKE YOU TASTE BAD.

That was a most informative question and answer session @FakeGrimlock. Again, we really appreciate your time and we look forward to reading your Tweets in the future!

If you haven't already, you should to check out @FakeGrimlock on Twitter or find him on his website at www.fakegrimlock.com. So what do you think about @FakeGrimlock? Does he hit the spot for you on Twitter? We'd love to read your comments below!

6 Responses to "An Interview With @FakeGrimlock"