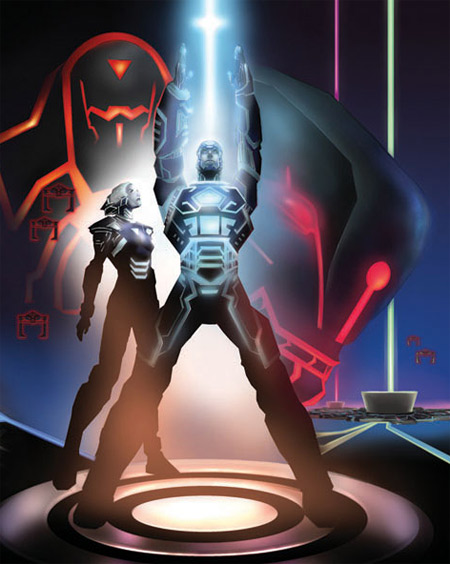 Ten Things I Learned From Tron

We mentioned in the cast a while back that I had an original Tron movie bit for the arc but it never went anywhere for two reasons, the audio I recorded for it sucked horribly and it wasn’t that funny anyway. So instead, I give you a quick overview of - Ten things I learned from Tron.

10. When planning a major felony chicks in high heeled running shoes always up the ante.

8. No matter what the circumstance, anything that happens after the sentence "Bring in the logic probe!" isn't going to end well.

6. One can lead a rich and happy life only speaking the words yes and no.

4. Never write a bunch of tank programs. In the long run it won't be good for you.

3. Stealing from someone smarter than you can go south in a hurry if they decide to descend to your level to get even.

1. The MCP did have a heart. It actually invented the amber alert system way before its time. Don’t believe me? Check this out, “30-56-99 are correct. Limited 4 and 8 are missing.” What we see here is the MCP’s plan to empower at least 99 operatives to locate bits that are missing. May the users bless little limited 4 and 8 and I hope they found their parent programs.

It’s interesting that after seeing Tron Legacy some of the characters going forward learned the same things I did. Kind’ve makes me proud really.

One Response to "Ten Things I Learned From Tron"