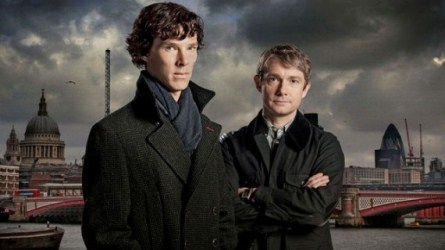 In a time of programming uncertainty and early cancellations on American TV, the BBC has produced some of the best television currently available. BBC’s new series Sherlock is absolutely a poster child for great television. Sherlock is a modernized version of the classic Sherlock Holmes tale set in the London of today. Unfortunately, I missed Sherlock when it first aired on BBC, but due to overwhelming positive reviews, comments, and recommendations, I made sure I set the DVR to record it when it first aired on American PBS stations on October 24th. Even amidst such high recommendations Sherlock not only delivered, but amazed me in its brilliance.

The Sherlock on today’s BBC is some of the best produced television I’ve seen in recent years. The acting is brilliant, and the depiction of relationships draws the viewer further and further into the story. Plus the movie-like format of a 90 minute episode allows for marvelous plot development. And as expected, Sherlock gifts viewers with wit and clever humor with ever scene.

While not laded with Hollywood style special effect explosions like the recent Robert Downy Jr film version, Sherlock does have its share of effects. The way the show visualized Sherlock’s observations through on-screen “text messages” brings the audience directly into Sherlock’s train of thought. The viewer is also treated with effects each time we are allowed into Holmes thought process.

After one episode I’m sold, Sherlock is a must-watch show for me. I look forward to the character relationships as well as overarching plots and crimes to be solved. If you haven’t seen Sherlock yet, you are missing out and need to check it out as soon as possible. With three 90 minute episodes aired and more to come in the near future, this is one show that you will not regret investing your time in.  For a limited time, you can watch streaming episodes online at PBS.

Have you seen Sherlock yet? I’d love to hear what you think of it!

5 Responses to "Sure About Sherlock!"