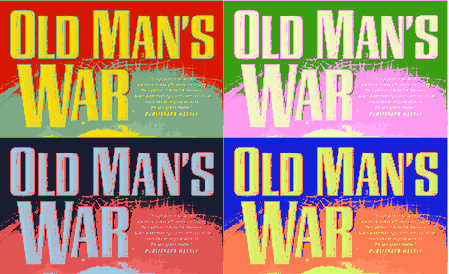 John Scalzi is a Freakin’ Genius

"Are you reading that for the first time?" a stranger asked me on the New York City Subway.

"Yes" I responded somewhat cautiously looking up from my book. As a New Yorker, I am not used to unsolicited literary commentary in public or any kind of interaction with strangers, ever.

"I envy you" he replied simply and in a moment was gone.

At first I was tempted to brush off this exchange. I closed the book for the first time in two days and considered what had just happened: A person was so moved by a book he felt obligated to engage a stranger in the subway to share the importance of the novel. I glanced at the cover which really didn't give anything away of the plot, just standard sci-fi ships flying in space. The story  was becoming with each passing word my absolute favorite science fiction novel of all time. In the coming years when asked what my favorite book was I would name this one and every book I read after this would be compared to it.

Three years ago on October 7, 2007 when the Galactic Watercooler forum was still but a babe and our book club was just taking shape a gentlemen posted a simple nine sentence recommendation to go read the strangely titled, Old Man's War. I read the thread and was so inspired I went and promptly bought World War Z.

Every month following Old Man's War was nominated again and every month it lost. To be fair, it was up against some pretty stiff competition. Starship Troopers, I am Legend, Dune...it was up against a virtual "Who's Who" of science fiction. Every month it would garner some support and invariably be pushed aside by yet another juggernaut.

In September 2009 something strange happened: Old Man's War won. I stared at the screen in disbelief. The little novel that could won? Really?

That day on my lunch break I dutifully walked over to Barnes and Noble and picked up a copy. I headed over to a local pub, ordered a pint and a burger and started reading. Two hours later the bartender asked, "Do you want me to warm your burger back up?" I looked up from the book to find the food untouched and the beer flat. "Oh," I remarked, "yeah, that would be great." Thus began my journey with Mr. John Scalzi who I contend is a freakin' genius. This post is clearly labeled in case you that suble point. As I glance at my freshly finished copy of Zoe's Tale on my desk I thought it best to reflect on Mr. Scalzi's achievement with this four book series.

Please note: I will at all costs avoid spoilers so feel free to read on uncorrupted. I apologize for any prose contortions I need to perform in order to accomplish the goal of breaking down four books without really telling you anything about them.

What Mr. Scalzi has accomplished is wholly remarkable. With Old Man's War he introduces his brave new world through the eyes of an everyman John Perry in a context that is familiar and comfortable to the reader with a slight twist. We are informed in the very first sentence that something is going on and are immediately intrigued: "I did two things on my seventy-fifth birthday. I visited my wife’s grave. Then I joined the army."

From there we walk the path with John as he leaves his life behind and joins the army. Each page slowly reveals a bit more of the mystery as John makes new relationships, leaves the Earth behind and leaps into a remarkable narrative filled with incredibly technology, characterizations and a beautifully crafted and well thought out universe.

Vague enough for you? Good. All I can truly say is that when I finished the book I immediately thought of my old friend Ender. "Buddy," I thought to myself, "You've got some competition." I won't do a side-by-side comparison of the two books because that would be unfair to both and spur unnecessary debate. I feel that Mr. Scalzi has accomplished a great deal of all the things I admired in Mr. Card's novel and then added a bit more. Old Man's War is clever, unexpected, rich and funny. The universe is fully realized, vast and complex. This set the stage for his follow-up books.

The Ghost Brigades follows Old Man's War with a twist: those characters you grew to know and love in the last book? Yeah, they are gone. Not dead, just gone. In this book Scalzi plays in the universe he created focused on a small aspect from the previous book. To describe the plot would be to give away too much so what I can share is simply give the book a chance. If you are not prepared for the fact that the foundation of characters you were accustomed to are now gone it can be hard to get into. After a chapter or two you get over it. Trust me.

The Last Colony once again explores the universe but this time focuses in on one planet and his fourth book Zoe's Tale provides a Rosencrantz and Guildenstern alternate view to The Last Colony through the eyes of Zoe (not a spoiler...it is right there in the title).

What I find remarkable about this series and Mr. Scalzi is his willingness to throw everything away over and over and find one nugget from which to tell a new story. He is not constrained by his own plot devices or narratives, his universe is one that once established provides a giant playground for him to play. He could have chosen to write give sequels to Old Man's War that simply retold that story over and over expanding it slightly but sticking to the same basic approach. I admire him for challenging his readers and himself in such a way that says, "I'm going to treat you as educated and thoughtful readers. I am not going to serve up the same slop over and over with a twist...no, I am going completely blindside you and hope you follow me down the trail."

So there you have it, four books discussed without really revealing anything about any of them besides the fact that it starts by a character joining the army on his 75th birthday and statement that the author is a freakin' genius.

Trust me on this, have I yet to lead you wrong with something I was passionate about? Firefly, Chris Hardwick, Glee, Enterprise, Life on Mars, pecan paaah, Eureka...the list goes on people.

Oh, didn't think he had enough geek cred? He is also a creative consultant on SG-U.

5 Responses to "John Scalzi is a Freakin’ Genius"