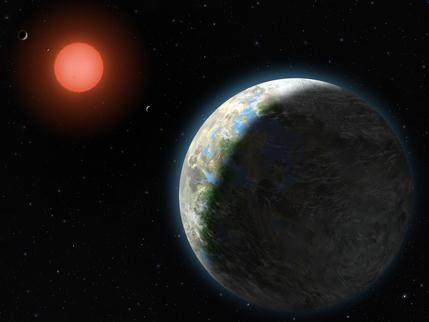 The GWC Crüe mentioned in podcast 239 that a new “Earthlike” exoplanet, meaning a planet orbiting a star outside our own solar system, was found around the small red dwarf star Gliese 581 G. Scientists and exoplanet hunters have been finding exoplanets since 1992 and to date have cataloged over 400 of them. Most exoplanets found to date have been gas giant planets like Jupiter or Saturn or bigger. Although with new instrumentation and refined techniques I’ll bet exoplanet hunters will be finding many more planets in the very near future. I’m excited about this and feel like I’m living in an era similar to the years just prior to Leif Erickson or Christopher Columbus. So what is an “Earthlike” planet, why will more be found in the near future, and what are the ways to find exoplanets in the first place?

Admittedly, humankind will have to stretch our legs around our own solar system first before venturing to Gliese 581 G or any other yet-to-be-found “Earthlike” exoplanet. But exoplanets are exciting because they might harbor life as we know it here on Earth. Our own solar system is probably devoid of advanced life forms as we image them. In fact, to find life like us it would probably have to develop on a planet just like Earth. In order for human-like life to evolve, it would probably need a planet about the Earth’s size and density. A rocky planet too big would likely be too heavy for a bipedal life form to evolve. Rather, life might stick to evolving as ground based snake-like creatures without bones and joints that could buckle under heavier gravity. A rocky planet that was too small would most likely lose its atmosphere like Mars or Mercury or the Moon. As far as scientists have been able to tell, gas giant planets like Saturn or Jupiter have no surface either. So it is unlikely life similar to a human could develop or be sustained in such conditions as found on a gas giant planet. No one knows for sure what the limitations are, but I tend to think life like we know it would probably only develop on a planet with a gravity very close to Earth’s gravity.

[caption id="attachment_5253" align="aligncenter" width="448" caption="Comparison of Our Solar System and the Gliese 581 System With Habitable Zone Included. Image Courtesy of the ESO as created by Franck Selsis, University of Bordeaux. "] Also, the planet has to be in the “Temperate Range,” which means it has to be in the right orbital range for liquid water to be possible. It’s a classic case of not to hot and not too cold. The exoplanet’s orbit must be close enough to its star to receive enough heat from the star not to have frozen water all the time. For instance, Saturn’s moon Europa is completely covered in ice. If Europa was closer to the sun, that ice would turn to liquid or gas possibly creating an ocean and atmosphere. The exoplanet’s orbit must also be far enough away from the star that liquid water would not boil off into gas and/or the gas and atmosphere be steamed off the planet like Venus or Mercury.

The problem with detecting such an exoplanet is that it’s really hard to see it from tens or hundreds or thousands or millions of light-years away. So scientists have developed a couple of processes for detecting exoplanets. The first process to come along to detect planets is known in common language as the Wobble Method, but also goes by the terms Radial-Velocity method or Doppler Shift Method, and it is simply the measure of the star’s Doppler shift due to a planet-like body orbiting the star. In space there is nothing to hold anything in one spot and that includes massive stars. If a star has anything orbiting it that orbital interaction will cause the star to move slightly, or wobble, from our perspective. The gravity from a star would act to hold a planet in orbit around it but the planet also exerts the same, albeit smaller, gravitational force on the star and that causes the star to wobble. However, the wobble is very small to detect. In fact, we can only detect it from the slight change in the light as we view the star. This effect is known in wave theory as the Doppler Effect. Just like sound waves from a passing freight train or semi-truck, light can also slightly shift as the object emitting light accelerates towards or away from the observer.

Exoplanet hunters would use multiple observations of a star over long periods of time (months or years) to determine 1) if anything is orbiting the star, 2) what the minimum mass of the orbital object is, and 3) what the orbital period and thus how close to the star the planet is. From 1992 through 2009 the Radial-Velocity method was the most successful practice to detect an exoplanet and scientists had confirmed a little over 350 exoplanets during that time.

Even with a big telescope the atmospheric conditions on Earth make it impossible to obtain a steady smudge free view of the surrounding space. Over the past few decades scientists around the world have launched several telescopes into orbit around the Earth to obtain a better view without Earth’s atmosphere interfering with the observations. The Hubble Space Telescope, or HST, is probably the most well-known space telescope. However, several newer space telescopes have been involved in the exoplanet search using another process called the Transit Method. If you’ve seen something pass in front of a lit light bulb before, you have experienced the basics of the Transit Method. When the light from a light bulb is obscured by another object, it appears either dimmer or totally blocked. While an Earth-sized planet would probably not be large enough to totally obscure light from the star it is orbiting as it passes between us and the star, an Earth-sized planet would effectively dim the light from the star similar to how the moon dims the Sun’s light during a lunar eclipse here on Earth. Even better yet, if the dimming takes place over a time period of about twelve hours, the exoplanet’s orbit would be considered very similar to Earth’s orbit. Since the dimming from a planet’s transit in front of a star is so difficult to detect through Earth’s atmosphere, a space telescope is much better suited to detect this change. In March 2009 the Kepler Space Telescope was launched into space and it was specifically designed to discover Earth-like exoplanets. Kepler is using advanced data processing, staring techniques, and a dedicated mission to rapidly accelerate the discovery of new worlds. As of November 11, 2010 exoplanet hunters now have discovered almost a total of 500 exoplanets using both the Radial-Velocity and Transit Methods. Most of these planets are large gas giants so far, but it is only a matter of time before Earth-like exoplanet gems start emerging among the planets discovered. Soon, Earth-like exoplanets will no longer be the stuff of science fiction or theoretical math equations such as the Drake equation.

In the coming months and years the use of the Kepler Space Telescope and the Transit method in combination with ground based telescopes using the Radial-Velocity method as well as other sensors such as the Spitzer Infrared Space Telescope, the shear amount of exoplanets discovered will expotentiallt increase. Eventually, I'm confident that exoplanet hunters will disocver an "Earth-like" planet in a star's Habitable Zone just by the numbers of planets involved.

Are you excited about the discovery of new planets? Do you have something to add about planet hunting? Do you have a favorite exoplanet? Please share in the comments section below! I’d love to hear your take on the subject.

PS - Audra, I know I'm no @BadAstronomer/Phil Plait, but I hope I was able to answer your couriosty about exoplanet hunting at least a little bit.