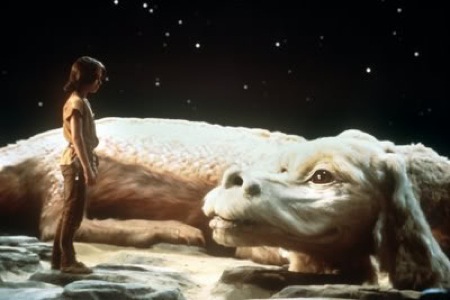 It's true that Sean is GWC's resident dragon expert and fantasy fiend -- but as we begin our three-week Dragon Arc for the 'cast, I've been remembering my childhood introduction to dragons and my own take on this diverse mythical species. I've included a few of my favorites here to illustrate why dragons have always been, in my view, friendly and enchanting rather than the terrible, destructive kind often portrayed in film.

Other than Pete's Dragon (1977), which my mom took me to see when it played in a local second-run theater in the early eighties, Falkor was the first dragon that I decided was badass on my own. The Neverending Story captured my imagination with its fascinating, and kind of scary, story, and perhaps the best ending possible in any fantasy movie. The main character basically gets infinite magic wishes from a beautiful princess, and then rides on Falkor's back to show up the school bullies who used to throw him in the dumpster.

Falkor is about eighteen feet long, with long, shaggy, pink-ivory fur, and large, round eyes set atop a friendly dog-like face. He laughs aloud with kind of a growl and protects and befriends the kid(s) who must endure a difficult journey. Falkor is trustworthy, wise, and loyal, and the perfect dragon friend I could imagine any kid wanting to have by her side.

Draco is in some ways a descendant of the trusty, Falkor-like dragon-steed. His look is more reptilian, with rougher scaly skin and dinosaur-like horns protruding from his crown. But he's also got expressive golden eyes, a kindly expression, and Sean Connery's rich brogue to emphasize his regal wisdom. 3. Norbert/a, from the Harry Potter Universe, here looking uncannily like our cat, Felix, when he's sleepy

Above you see the slightly goo-covered, just-hatched Norbert the dragon, one of Hagrid's beloved creature companions from the Harry Potter books and movies. Of course, later Norbert turns out to be Norberta, and an intimidating dragoness at that. But what makes Norberta one of my favorites is the way that Hagrid's love for dragons (in spite of their frightening size and capacity for destruction) seems to bring out the best in the them, just like with people. I like to think that some people seem scaly and scary on the outside, but with a little support they can flourish into heroes -- and maybe even swoop down and save the day just when it matters most. Toruk is the red banshee that Jake Sully is finally able to tame at the end of Avatar. (Technically, perhaps, banshees and dragons are different, but in my mind they're close enough for this comparison.) As Jake discovers a part of himself and gains an enlightened view of a different culture through his experiences with the Na'avi, he also learns something about the Na'avi's connection with natural forces. By physically (and therefore spiritually) connecting with the wild banshees, the Na'avi earn the trust and acceptance of the creatures. Each person connects with his or her banshee uniquely, depending on both personalities. While the Avatar banshees aren't as snuggly as Falkor or Draco, they have attitude and a fierce independence that I respect.

I have not yet seen the widely acclaimed movie How to Train Your Dragon (2010), so please forgive the omission. I'd also like to know: What are your favorite dragons? How were you introduced to dragons earlier in life, and what films or stories reinforced or changed that concept for you?

6 Responses to "My Favorite Dragons"