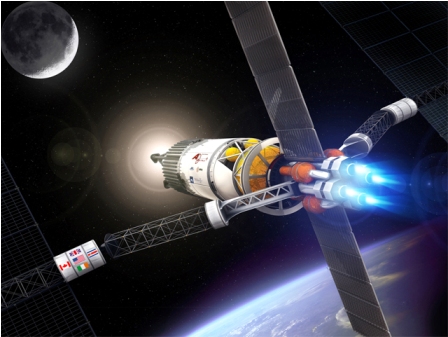 A Conception of a VASIMR® Powered Lunar Tug Spaceship.

I’d have to take a poll to be sure, but judging from the reaction to last year’s five week GWC Cosmos podcast arc I’d bet that a good percentage of GWCers are interested in space travel, space colonization, or just simple weekend sightseeing camping trips around the solar system neighborhood. Unfortunately, there are millions of challenges to overcome before those activities become a reality for humankind. But since I’m a trained propulsion expert, I tend to narrowly focus on how we get from point A to point B so my scope is a bit smaller. I usually concern myself with two challenges. The first challenge is how do we get off the third rock from sun, free ourselves from the Earth’s atmosphere, and achieve a stable orbit. The second challenge is once we are in orbit around Earth, how do we get to the next destination whether it’s the Moon, Mars, one of the moons orbiting a gas giant, or even out to the asteroid belt to commence mining activities to help pay for cool Mass Effect gear or EVE online ships. Solarpilot posted an article last year about NASA’s new Ares rocket for heavy lift applications and we are all anxiously awaiting our cheap Virgin Galactic ride into the edge of space above our atmosphere (Except for Sean who likes spaceships but hates space). Those sorts of technologies in Ares and Virgin Galactic are working on how we get into space to start with and take care of that first challenge. But for the solution that second challenge, I’d like to show you hardware that exists today called V.A.S.I.M.R.® together with a yet to be developed electric generation capability that will help assist us to drive around the solar system. V.A.S.I.M.R.® (or simply VASIMR®) stands for VAriable Specific Impulse Magnetoplasma Rocket and it is an efficient and variable propulsion system that could feasibly turn a six month Earth to Mars transit time into mere days and it exists today. A company in Texas by the name of Ad Astra is currently developing the technology. In simplest terms, VASIMR® is a form of the electrically powered spacecraft propulsion family that includes ion drives, plasma drives, and arcjet propulsion. VASIMR® has been tested in a vacuum chamber here on Earth and is scheduled to fly on the International Space Station in 2014 for initial testing. If everything goes well, VASIMR® will ultimately be utilized for periodic orbital boosts of the space station instead of the current chemical rockets. Once proven, we will most likely be seeing solar system probes powered by VASIMR® as well as return trips to the moon in the near future.

Forms of electric space propulsion are not new. In fact the Russians/Soviets have been flying a form of electric space propulsion in space since 1971 with a 100% success rate called a Hall Effect Thruster. NASA tested a similar electrostatic ion rocket called SERT in 1964 and most recently used an electrostatic ion rocket engine called NSTAR in 1998 on the Deep Space 1 mission on an interplanetary trajectory. NASA is currently flying NSTAR on the Dawn asteroid exploration mission, and there are over 100 XIPS (Xenon Ion Propulsion System) thrusters flying on geostationary satellites right now. But all of those engines have a much lower thrust than the VASIMR® and they use electrodes to excite the fuel. Those electrodes wear out over time and the engine is no longer able to produce thrust. The VASIMR® thruster uses radio waves and magnetic fields to ionize the propellant instead of the electrodes, so with no parts to wear out the engine will produce thrust as long as there is fuel to use. The VASIMR® rocket engines tested to date on the ground, the VF-200 and the VX-200, have achieved a thrust of 5 Newtons with a specific impulse of 5000 seconds. This, of course, is not enough thrust to launch a rocket from the earth’s surface. But once in the vacuum of space, VASIMR® can operate for tens of thousands of hours expending very little propellant. You can think of specific impulse, or Isp, as a rocket’s “miles-per-gallon.” The higher the number, the more efficient the engine is. The Space Shuttle’s main engines in contrast produce 1,800,000 Newtons with a specific impulse of 363 seconds. In order for the VASIMR® thruster to achieve those 5 Newtons of thrust, it requires a lot of electric power. In fact, it requires on the order of 200 kWatts of power. In space, 200 kWatts is a lot of power. In order to achieve that amount of power requires either a large solar array or some sort of nuclear power generation source. The ISS large solar arrays, for example, do not even produce enough power for sustained 200kW thrusts. With a nuclear powered design, radiation shielding would be required in the design.  Also, the best nuclear reactor flown in space to date by the Soviets generated only 10 kWatts, far short of the 200 kWatts required. This is obviously a shortcoming that must be addressed within the weight margins required for the flight mission. Until the power generation challenge is solved, VASIMR® will not be capable of performing as fast or as efficient flight operations. We’ve all seen the massive Saturn V rockets that NASA required to send two astronauts to the lunar surface and back. You can roughly think of that as needing a semi truck full of gas just to get you to the moon and back. And if NASA wanted to use the same chemical rocket technology to transit to Mars and back it would require several semi trucks full of fuel, with some pre-positioned in Mars orbit and on the Mars surface before a manned mission left Earth. However, with the VASIMR® rocket engine NASA could cut the total amount of fuel required for a trip to the Moon or Mars drastically. For example, to transport 34 metric tons of cargo to Low Lunar Orbit with a chemical rocket you would need 60 tons of fuels. On the other hand a VASIMR® powered space ship would only need 8 metric tons of fuel. Assuming the power generation challenge is solved, perhaps the biggest advantage of the VASIMR® thruster is a possible faster transit time to destinations like Mars or the asteroid belt. Some VASIMR® concepts show a feasible 39 days transit time to Mars. However, Mars Society President Robert Zubrin has recently expressed concerns with the VASIMR® thruster concept since it would have to use a power source that doesn’t exist yet. For now, I’m looking forward to the space station test of VASIMR® in around the 2014 timeframe. After that, I’m excited to see the possibilities that a VASIMR® rocket engine will bring us. Are you excited too? I would love to read your comments below!

3 Responses to "Voyages Via VASIMR®"