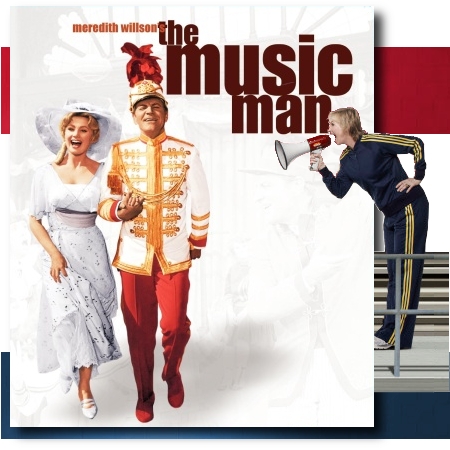 While most GWC denizens are sci-fi/fantasy geeks, there's a healthy number of us that have fallen in love with the musical TV show Glee.  Something about awkward high school misfits belting their hearts out in the face of overwhelming unpopularity speaks to anyone who's ever sat at the wrong lunch table.  But if you're still not convinced to trade your phasers for a high F, let me introduce you to a musical that might help get you in the right mood.

Years before he peeled his face off in The Last Starfighter, Robert Preston charmed and connived his way through my favorite musical, The Music Man. You've probably seen it parodied in episodes of The Simpsons (“Marge vs. the Monorail”) and Family Guy (“Brian Wallows and Peter Swallows,” “Patriot Games”), and there's good reason it's so lovingly been given tribute.

Unlike the larger, stagier, more preposterous movie musicals of the era, Music Man takes place in a small town with funny, believable characters that you might imagine meeting on the street in 1912 Iowa. Writer Meredith Willson keeps his story rolling with songs that are quirky, catchy, clever, and fun (sound like a certain TV show you've heard about?) rather than overwrought and grandiose. His wordplay alone is enough to make you tap your feet before the music even gets started. The romance between the two leads is hard won rather than instant and shallow, and when the music gets heartfelt, it's sincere.

And check out some of the other actors here! Most of you probably think of Shirley Jones as Mrs. Partridge, but to me she's the cool and independent Marian the Librarian—a woman every geek girl should be proud to emulate. I'm sadly unfamiliar with Buddy Hackett's work as a comedian, but I'll always remember him as Marcellus Washburn singing “Shipoopi” (and as Scuttle the seagull in The Little Mermaid, and a guy who stabbed himself on Murder, She Wrote, but that's my random access memory working there). And “Ronnie” Howard? Not Opie, not Richie. Nope, to me he's Winthrop, the little lisping kid who gains his confidence by learning to play the cornet (if that's not a plot-line straight out of Glee, I don't know what is).

So expand your geek cred—give The Music Man and Glee a try, and make your day a little sunnier.

Check out one of my favorite bits from The Music Man below, where con man Harold Hill evades both a gaggle of nosy, gossipy women, and a group of pesky town councilmen by getting them to sing to each other. I bet you'll never say the word “Balzac” the same way again.

"Pick a Little, Talk a Little"