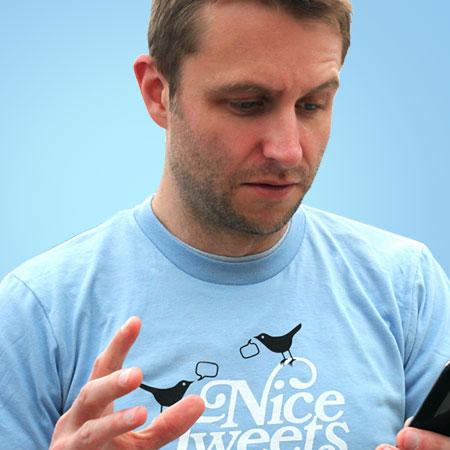 Not that there is anything wrong with that.

My man crush for Chris Hardwick started about a year ago. Like every geek the first thing I did when after signing up for Twitter was to follow Wil Wheaton…because really, the dude was Wesley. One of Mr. Wheaton’s first tweets was that he was having lunch with his good friend @Nerdist. “Nerdist?” I thought to myself, “that is a sweet name.” Being strong in web-fu I located Mr. Nerdist’s blog and was greeted with this:

The Best/Worst Tattoo I've Ever Seen

After I picked myself up off the floor from laughing I made a mental note: Seek out more of this Chris Hardwick fellow.

Chris’s indoctrination of my soul quickly continued. It turned out he was not limited to witty geek observations and disturbing tattoos but he was on television as well. His blog led me to Web Soup, a show he hosts which I had never heard of because it is on a channel I don’t get: G4. Never fear! It was available in snippets on iTunes. My hour-long commute for a few weeks was now filled with videos of the dregs of YouTube (think testicular trauma, creepy clowns and bad commercials). I realized I wasn’t watching for the shock value of the videos, but to Chris’s reactions to them.

Continuing his plans for global Nerd domination he has now added a podcast to his utility belt of awesomesauce. As I listened to Chris’s Nerdist podcast today I realized why I respect him: He is smart, he is funny, he is clever and he is completely himself. From his interviews he discusses how at a certain point in his career he stopping trying to be something he was not and to embrace the core of who he is: a nerd. I am drawn to him for the same reason I am drawn to Adam Carolla; they both have absolutely zero pretense and say what they are thinking. With Chris this can range from his upbringing as a professional bowler’s son to using the word solipsism without breaking a sweat. I mean seriously: solipsism. Look it up. On Web Soup he channels every man’s inner teenage boy with a smirk and a high five, literally. His stand-up is more refined observational humor, noting that, “Bowling balls are hick eggs, buried in ash until they emerge mullet first to be fed regurgitated Bud Light and Hot Wings.”

As a closet geek it is easy to see why I admire him. It can take me years before I admit to someone that I am a Battlestar Galactica fan while Chris would scream, “FRAK THAT!”, weave in a reference to South Park, the Muppets and the A-team that will leave you roaring with laughter. His wit is deft and he reminds you of the kind of person you wanted to hang out with in high school. Now that he has added his own podcast to his overall portfolio he should consider himself the King of all Nerd Media.

Chris you bastard, you are living the dream.