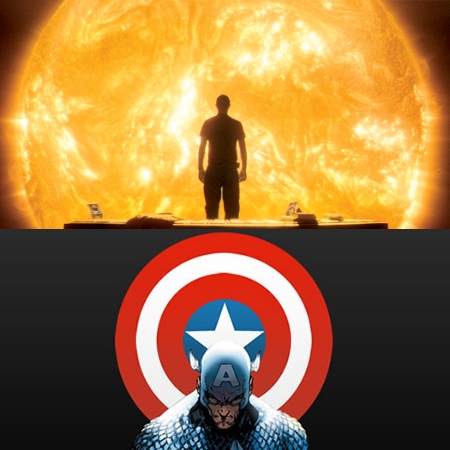 I've been meaning to write and recommend Sunshine for ages now, and the Big Three's discussion on the podcast about Chris Evan's casting as Captain America has prompted me to action.

Danny Boyle (director of Trainspotting and Slumdog Millionaire), doesn't like to claim himself as a sci-fi director, but with 28 Days Later and Sunshine under his belt, it's obvious he's pretty good at it. In Sunshine, 50 years in our future, an eight-person crew flies a vessel called the Icarus II toward the Sun, pushing a nuclear bomb the size of Manhattan in hopes of reigniting the dying star. When they discover the remains of the Icarus I, the first doomed ship to attempt the mission, things go from bad to worse, and it becomes less and less likely that they'll survive long enough to save humanity.

Color-wise, Sunshine pulls off a dramatic feat. All the interiors remain true to a blue-and-gray palette, so that when the sun blazes into view in the exterior shots, the hot yellow stuns your eyes. I got to see this movie in the theater when it first came out, and I swear I could feel the room warming up whenever the sun was on screen. To top it off, the movie has one of the most beautiful scores I've ever heard. It's been playing in my iTunes for months since I found it.

The talented Cillian Murphy (28 Days Later, Batman Begins) leads the cast as scientist John Capa, but it's Chris Evans's performance as Mace, the engineer, that for me carries the dramatic weight of the film. Weirdly, part of me doesn't want to like Evans as an actor, because he always appears to be just on the edge of playing a simple, dumb jock. But from what I've seen of him here and in Push (which I enthusiastically reviewed in an older post), I think that appearance is only skin deep.

Mace isn't a flashy, bad-ass type of hero. In fact, he starts off as kind of a jerk. But as the story goes on, his attitude tempers to one of quiet resolve. He understands more than anyone else in the crew that they won't be coming back from their mission, and he accepts the responsibility knowing that the six billion people they left back on Earth will have a chance at life. As horrific events befall the Icarus, Mace's physical and emotional strength remain an anchor amidst the desperation. Capa may be the one who pushes the big red button in the end, but it's Mace's sacrificial heroism that makes it possible.

You can't help but be impressed by this guy. Though I'm no Captain America expert (and I haven't brought myself to watch the Fantastic Four movies), I believe someone made a good decision to have Chris Evans don the red-white-and-blue suit. If Push and Sunshine are any example, he'll bring an unexpected and welcome strength of character to the legendary superhero.

(Final note: I have to be honest and supply a caveat for this recommendation. If you do check out Sunshine—which you should—you'll find that the ending gets chaotic and surreal and doesn't make a lot of sense. For me, honestly, it kind of unraveled. I saw the movie twice and had to check out this Wikipedia synopsis to figure out what had just happened. Maybe it's just me. But I still think it wouldn't be a bad idea if you read it first before you saw the movie, or kept it handy for just after.)

* Thanks to the blogger at The Whole Garden Will Bow, for the Sunshine screencap, and the guys at Film School Rejects, who had the pic of Captain America headlining one of their posts.