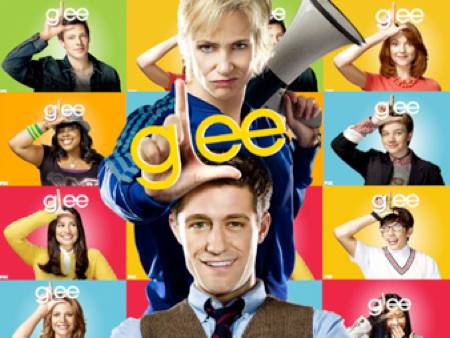 A man named Will walks down a dim school corridor. His shoulders slightly hunched, he marks time in the same dull routine. He derives no real pleasure from what he does, even though he is exceedingly good at it. He glances absentmindedly towards a dusty trophy case overfilled with forgotten awards and as he pauses his eyes fall on a plaque. Engraved with the name of a former teacher who passed away, the inscription reads:

By its very definition, glee is about opening yourself up to joy.

Thus opens Glee, a show you -- and you're not alone -- may have rejected out of hand. ("“A show about a Glee club?” you think? "Seriously?  No thank you.” Or possibly: "What the hell is a Glee club?") If this describes you, I'd like to let you in on a little secret: This show isn’t about a glee club. This show is about you.

We often scoff at the very idea of glee. The word glee makes us cringe. Imagine in your mind a person who is "gleeful." Do you (like me, from time to time) immediately imagine a pipe in your hand to go beat that person down? Why do we ridicule those true to themselves, those who risk being different from the norm?

Answer: We learn early to eschew that which we enjoy for that which we perceived to be "cool." We trade those things at which we excel for practical skills. And we make choices devoid of risk and passion, choosing to be a bookkeeper instead of a teacher (or musician, or astronaut, or... you get the idea) because being a bookkeeper is safe and financially rewarding. Being a whatever-you-rejected isn't. It's potentially a risk to one’s future.

In short: We make the choices others make for us. It's easy. No one will question it.

Do you think about writing a story but never seem to find time to put pen to paper? Do you think about choices you have made in your life – and sometimes wish you you could go back and smack yourself? Do you sit at work looking at job boards but never apply to any? Are you afraid of failure? (Or are you afraid of success?) It’s easy to blend in with the crowd, to not attract attention to yourself. Taking a risk opens you up to inspection, and to possible rejection, pain and remorse. Will Schuester, Glee’s main character, asks those questions. In the show’s pilot episode he decides to leave his job as a teacher because his wife is expecting their first child, and he knows he can earn more as an accountant. As he sits watching an old video of himself in high-school performing at a national glee club competition, his friend Emma Pillsbury calls it like she sees it:

Emma Pillsbury: Do you know who that is? That's you, Will. That's you happier than I've ever seen you.

Will Schuester: That was the greatest moment of my life.

WS: Because I loved what I was doing. I knew before we were half-way through with it, I remember that we were gonna win. And being a part of that, in that moment, I knew who I was in the world. And the only time I felt that way since then was when Terrie told me I was gonna be a Father.

WS: No, no. I need to provide for my family.

EP: But provide what exactly? The understanding that money is the most important thing? Or the idea that the only life worth living is one that you're really passionate about, Will?

The show also asks the opposite question: Do we sometimes become the oppressor, treating with scorn and anger those who make the leap toward doing something different? Take Finn, Glee’s quarterback who over the course of the pilot episode chooses to join (and stay) in glee club. How do his peers on the team  react to his decision to step outside the norm? They surround him with paintball guns outside the school and shoot him repeatedly.

When Finn decides to quit glee, the team rewards him by allowing him a position of honor: Rolling an outhouse – complete with a wheelchair-bound nerd inside – down a hill. Finn stares at them coldly, then lets the nerd out. When confronted, Finn also calls it like he sees it:

Finn: Don't you get it, man? We're all losers! Everyone in this school! Hell, everyone in this town! Out of all the kids who graduate, maybe half will go to college, and two will leave the state to do it! I'm not afraid to be called a loser because I can accept that's what I am.

Sure, some of Glee’s characters do find it in themselves to break out and be different. But they all pay a price. Will literally wills the Glee club into existence, shelling out cash he doesn’t have to make it happen. The club’s members accept mockery -- and an occasional slushie to the face in the school halls. As both the quarterback and glee club star, Finn lives on the outs with both sides. Rachel, the Glee club ingénue, is routinely and publicly eviscerated for maintaining a public blog featuring video of her singing. Sounds like a a melodramatic after-school special, doesn’t it?

This ain’t Everybody Loves Raymond. This show is brutally and hysterically funny. It’s incredibly clever with razor-sharp writing and characters. Line for line no show since Arrested Development or Ally McBeal has intertwined biting-edge comedy with drama and real world situations.

This show isn’t an accident, either: Each layer you peel away uncovers another bit of brilliance and thoughtfulness -- a heartfelt example of belief, an object lesson about the importance of choice, strength of character and the importance of self reliance. Glee is dramatic. Glee is hysterically funny. And Glee is beautifully written, performed by incredibly gifted actors -- with the occasional singing and dancing.

And then there’s the music.

Just head over to iTunes and see what’s number one selling album right now. (I’ll wait.) It isn’t a compilation album, either. It’s an album of a capella music covers orchestrated for the show. And it’s far more than a quick gimmick. These songs deliver power – not just because they’re impeccably and entertainingly performed, but because they intertwine with each character’s personal narrative, infusing the show with much more than rhythm. They infuse it with soul.

But don’t expect “Sit Down, You’re Rocking The Boat” over and over. Kanye West’s “Golddigger” or Beyonce’s “All the Single Ladies” is more this club’s style.

I could go on describing and analyzing the show’s cast, characters, and so on, but you can get that from dozens of other articles ‘round the net. Let me instead finish by asking you three questions:

If you can honestly answer all three questions -- and offer an exuberant affirmative to the third -- with no doubt whatsoever, you may not get as much from Glee as I have. For the other 99.9% of us, you’ll be happy to know that new episodes of Glee return tomorrow night Tuesday, April 13th. And the first twelve episodes are available via iTunes and Hulu. Glee is about a lot of things, none of the simple and none of them expected. It's a show about discovering self-worth, challenging expectations and, by very definition, opening yourself up to joy. By stepping up to what appear to be insurmountable odds, facing that which terrifies you -- and risking it all -- you might just find yourself in a place you never expected discovering something wonderful.