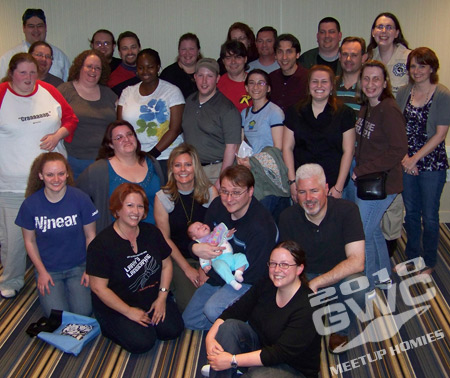 Thoughts on the 2010 International Meetup

As I reflect on the past three days it is immediately apparent that the GWC community is still a source of constant amazement for me. Once again our tribe gathered to reflect on the past year and revel in each others company and once again everyone rose to the occasion.

It’s a strange thing - it was as if no time and decades had past between the annual meetup spawn points. The kindred spirits of the friends we had met were as warm as ever and new faces popped up to take the places of others that could be with only with their digital presence. Yet again a simple joy found its way to our mugs.

Much has changed this past year for many of us. It was a tight year financially for everyone and some folks were sorely missed due to those pesky life issues that seem to creep into the day-to-day ebb and flow that rules our calendar. I had difficulty being with the meetup activities this year as well due daddy duty and it killed me as much as some of the folks who just flat couldn’t make it. I watched often bleary eyed and exhausted, running almost completely on whatever caffeine drink I had last consumed, at the constant laughter that our meetup attendees enjoyed. The pictures flowed and tweets were being pushed out at such a rate a bystander might have thought it was our full time job.

I had to make a silent laugh to myself when I heard that ArkansasEngineeringGirl’s father (who was being a concerned parent and worried for her well being) was a little apprehensive about his ‘little girl’ traveling cross-country to go to Texas with a bunch of essential strangers she had never met to party. What I wished I could have explained to him is that she couldn’t have been in safer company. Should anyone have even thought aught of ill towards her general direction they would have been set upon by close to 35 enraged geeks. However it is difficult to explain to someone who has never been – Alpaca’s leave no one behind.

It’s this kind of mentality that makes me proud to be a very small part of our community. There were a thousand stories that will surface from the last three days together. Each lived from a slightly different angle - each with its own value to its owner and each with a smile from the lips of the person telling it. Though I was not able to go to every event and couldn’t be with the ‘paca herd all that I wanted, I know that I will see my friends, perhaps even more of them, next year and I must grin at the thought.

Much of the weekend is still swirling in my head, a jumble of thoughts, images, stories and fun. But before the massive doses of liquid stimulants completely leave my system and the inevitable post-meetup crash overtakes me… you my friends, both old and new continue to make the lives of your humble GWC Crue better for knowing you. My hat is off and beer held high – to you, my friends, my family. My heartfelt thanks you all, should my daughter want to learn about the best humanity has to offer she need only look toward a herd of 'paca's, she will find it there.

8 Responses to "Thoughts on the 2010 International Meetup"