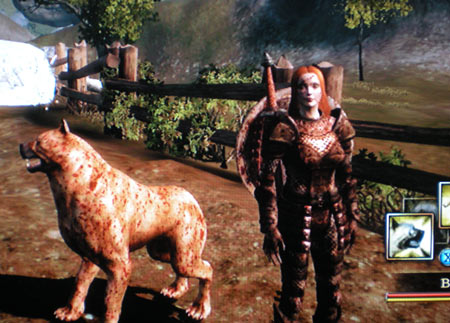 I realize that I’ve already posted about Dragon Age Origins recently but there is something of great note I discovered a few days ago – there is a playable dog character. That’s right, take a gander at my new pup Bronx.

He’s a playable, levelable character just like any of the others. I named him after Bronx from the show Gargoyles. It’s kinda fitting since they are both about the same shape and look fierce but are really sweet pups. He’s mostly tan colored but this is right after the battle in which he joined the group so he’s still got blood on him – he is a war dog after all.

Only Fable II came this close to character perfection but was just a hair off the mark. I vowed to uncover every war dog quest and level him to the utmost without delay. My strategy for playing just became much easier, no more storyline just for progressions sake. My strategy now will be, “How does this help Bronx?”

I can now forgive BioWare for letting you switch paths in Mass Effect 2 - I have a new puppy!

One Response to "My New Dragon Age Puppy"