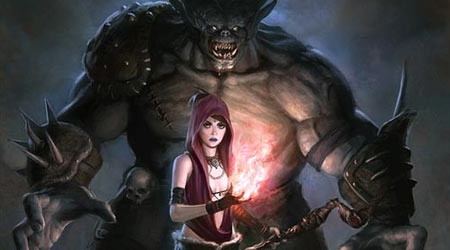 Part of the Xmas loot this year was Dragon Age Origins for XBox 360. Both my brother and I got a copy and spent the day after playing it up. After spending about 8 hours with the title I can say without fear of contradiction that Bioware is becoming my favorite developer. Oh, and did I mention the chick in the above image is voiced by Claudia Black? Yeah, hotness.

Not only are the controls like the much-beloved Mass Effect, complete with a time-stopping action wheel, but the game play is smooth and engaging. It’s solid in combat and in adventure mode with enough of an inventory and leveling system that you can trick your character out just about any way you choose.

After a few hours with my brother playing a mage I wasn’t really feeling it. So I started fishing around for another character type. The Mrs. was riding the other end of the couch when she asked -- after I was flipping through character types -- if you could make the avatar look like other people. I answered that you could, within reason. So her challenge to me was to make a Beverly Crusher -- her favorite TNG character.

After about 20 minutes of futzing with it I settled on an elf warrior -- which had the most Crusher-like bone structure -- and started building her to look like Beverly. I think I came pretty close. It's not perfect, of course, but the stunt worked well enough that now my wife was into what would happen to Beverly the elf who, it turns out, we decided to make into a shield maiden. I know, giant surprise.

It’s this kind of customization that makes Bioware games great titles to spend some time with. They just suck you in.