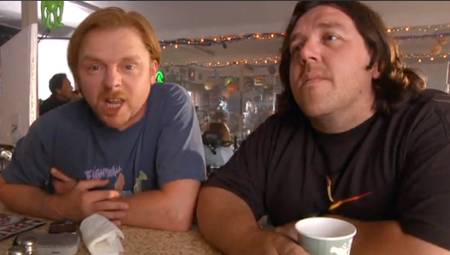 My introduction to Simon Pegg was via Shaun of the Dead, which I first watched around Halloween last year for our '08 GWC special. And, of course, I saw him in Trek 11 (or one, depending on how you're counting.) But my first real Simon Pegg experience came over the last week or so as Audra and I made our way through his 1999 series Spaced. Pegg co-wrote space with his co-star Jessica Stevenson, and it's awesome -- a real tribute to the geek lifestyle (and what it's like to have a family of friends).

I've got Hot Fuzz on my Netflix list and can't wait to check it out, too. But I noticed that Pegg and his ex-flat-mate/eternal-TV-sidekick Nick Frost co-wrote a movie that's apparently pushing through production right now. It's called Paul, and it's the story of two sci-fi geeks who detour their post Comic-Con road trip through Area 51 "where they come across an alien named Paul."

6 Responses to "What Is Paul?"