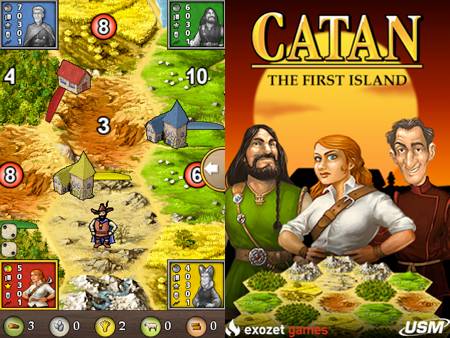 You Can Have Wood For Sheep — On The Go

Anyone geeky enough to have spent a few nights board-gaming with friends will recognize Settlers of Catan's catch phrase above. But did you realize you can now play your favorite hexagonal empire building game on the iPhone?

Reading the description on the iTunes store, it looks like you can either play against other players via a network connection or play software NPCs, each with their own personality. "Jean," for example, is "a pirate who knows no compromise" while "Sean" is "a knight who takes what is rightfully his." And United Soft Media, the game's creator, says that the game follows the "original Settlers of Catan rule set."

Maybe you long-time gamers can help me out a bit. What does that mean about how it handles resource trades? Could one trade any time or only during one's turn? For that matter, how do you play? Admittedly, trades are my favorite part of the game as they're the game mechanic most open to social engineering.

Anyway, all-things-Apple bloggers TUAW report that this is an official version, replacing an unofficial knock-off called Kolonists that didn't survive long on the app store after infringement claims from the game's rightful owners. They also mention that USM has ported the game to the Nintendo DS, and you've likely already heard of the unrelated (but fun to play) Xbox Live version. This game really gets around!

It's $5 on the iTunes store, and available now. And the perfect way to bone up on the game before your next game night.