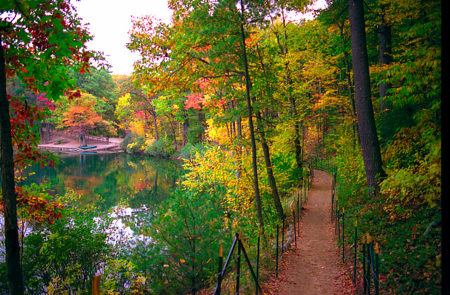 What If Thoreau Had An iPhone At Walden Pond?

A funny thing happened on the way back from the Apple Store… I confronted myself from 1999, and me from ten years ago was horrified at what I had become.

Today I set up an appointment with the Genius Bar on my iPhone. The time was 11 a.m. and I was frustrated to see the next available appointment was for 12:10 p.m., a whole hour away. I managed to pass the time by queuing up a playlist on my iPhone that I made the previous night of the best songs from the television show, Glee, which I had purchased individually on the fly from iTunes.

I arrived for my 12:10 p.m. appointment at 12:20 p.m. and was told politely that I missed my spot and would have to sign up for a new appointment, which would be in twenty minutes. I was annoyed and stomped off, trying to figure out how to spend twenty minutes with nothing to do. I flipped through various iPhone apps and checked NY Times headlines, read a few reviews on Flixter, and wrote a few emails after texting my wife and playing Ninja Ropes.

I walked back into the Apple store with my old iPhone and walked out with a new one. Not an upgrade, but a shiny new one. What was the issue with the old one? It had become sluggish. The kind employee plugged it in, confirmed that there had been a few latency issues and gave me a new one with no questions asked. Within three minutes they had transferred my phone number to the new device and within thirty seconds my 500 contacts were automatically populated from my account online. All because it was taking a few seconds to open an application.

And yet I was still annoyed.

I had to wait until I got home to resync my iPhone with my computer to get all my applications -- a full four hours -- by using a process that could be described as seamless. In the space during my ten-minute walk between the Apple Store and my workplace, I began to get antsy. I began to wonder if anything new had been posted to Fail blog. I was curious if anyone had commented on the Facebook picture I posted of my daughter. I began to worry I was going to miss out on the trend of the moment because I didn’t have access to Twitter. So, like a junkie craving his fix, I began downloading applications. “Just one,” I thought at first. But one led to another and soon I had pages filled.

That was when I slammed headfirst into myself from ten years ago.

1999Self: “You almost walked into traffic because you're staring at that stupid thing.”

Me: “Stupid thing? This is an iPhone! I am plugged into the collective consciousness! I know what is going on everywhere in the world. I am following the exploits of Balloon Boy, watching the latest video from Felicia Day, and checking my stock portfolio.”

1999Self: “That is all really cool, I admit. Do you know what day this is ten years ago? Today is the day you first forgot your cell phone at home.”

1999Self: “Of course you do. You had only had your first cell phone for a few months. You were walking through a bookstore and reached for it in your pocket only to discover it wasn’t there. In one electric moment you felt naked, alone, and completely liberated. No one could contact you; messages could wait as you strolled through the city without a care in the world.”

Me: “Yeah, but I was naïve. Look at me now. I carry 10,000 songs in my pocket. I have access to every shred of information humanity has ever devised. I can access satellite images of where I am right now and this will tell me where to go if I am lost.”

1999Self: “Here is what I see. I see an overstimulated information junkie. I see someone so connected to the world around him he is in danger of losing himself. I see someone who values trivia over substance and allows others to do his thinking for him. When was the last time you had time to think, just think? No iPhone plugged into your head, no computer in front of you, just a walk in a park.”

Me: “I don’t have time for that anymore.”

He stared at me with pity and I stared back at him angrily. He breathed in deep, tipped his head and simply said, “Good luck” as he turned and left.

I stood on the sidewalk quiet and alone. I looked down at my iPhone which informed me that I had a text waiting, I had received a phone call, and someone had left a comment in my Facebook account. I turned for a moment thinking that if I walked back to the Apple Store I would have a high-speed connection which I could use to download the latest episode of Techstuff to listen to on the walk back, but instead I simply slid the phone into my pocket with the ringer off. I had five minutes between me and my workplace. I wondered what I might think about…and was excited about that fact.

4 Responses to "What If Thoreau Had An iPhone At Walden Pond?"