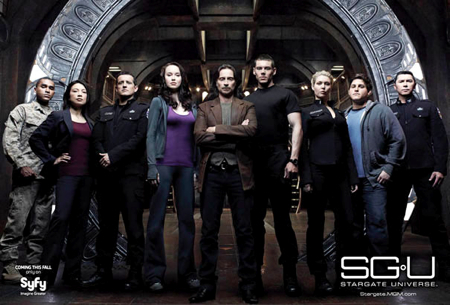 Having seen the two-hour premier of the new SyFy series Stargate Universe, I am stoked for what looks like another well-crafted, action-filled sci-fi drama. As we've seen in shows like Battlestar Galactica, established actors can bring the skill and gravitas required for a good dramatic series -- in this case, Robert Carlyle (The Full Monty, Eragon), Lou Diamond Phillips (La Bamba, Stand and Deliver, Young Guns), and a host of experienced television actors.

Compared to previous Stargate series, SG-U's serious and gritty style stands out, more reminiscent of BSG than of the campy humor and geeky in-jokes we've come to love, particularly in SG-1. We get colored filters that make the world look gray and inhospitable, and we get shaky cameras. Most importantly we get realistic characters who hook up in the storage closets and people who get wounded (and killed) in action in a way that feels more true-to-life than say, the way Star Trek: Voyager scrubs the deck clean of pesky casualties and carpet stains only moments after an explosion decimates the crew.

But to do SG-U true justice, it helps to resist the urge to compare it to SG-1, Atlantis, BSG, Lost, Voyager, Halo, Mass Effect, Lost in Space, The Last Starfighter (ahem) ... You get the idea. SG-U borrows favorite elements of these shows, but its situation, plot, and characters stand up on their own.

Robert Carlyle's intelligent, morally ambiguous, and impenetrable (except for teary alone moments) Dr. Rush proves complex in the way we expect of quality hero/villains. Elyse Levesque plays a so-far interesting Chloe McGavin Armstrong. And David Blue brings to life Eli -- a video game genius who gets transported to Rylos an alien ship to provide a little Shakespearean comic relief/wisdom. (He's my favorite character so far.) It'd be nice to see some strong female characters emerge as the show progresses, and I expect we will if the Stargate tradition exerts its influence. There's a lot of good sci-fi and supernatural television on this year -- so much that I'm using a calendar to keep up with it all. But with its promising pilot, cool storyline, and well-crafted (and acted) characters, the only decision I need to make about SG-U is whether to watch it followed by Sanctuary while I TiVo Dollhouse -- or the other way around.