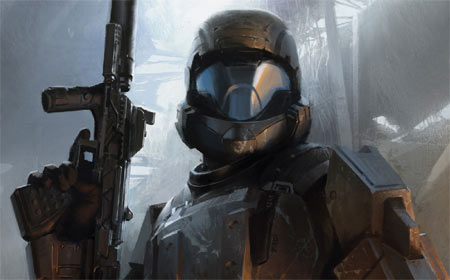 I finished the storyline for Halo3 ODST this afternoon and to sum it up in two words - it rocked. I didn’t quite know what to expect and it took a level or two to get my bearings but in the end I think many will agree with me.

The first thing you must remember is; “You are not Master Chief, you are The Rookie.”  And in the beginning, being the Rookie is kind of a bummer. Your jump is about half what the MC’s is and though the 7 foot tall Spartan can handle two weapons at once The Rookie cannot.

As many have pointed out already health is a little different as well, The Rookie needs heath packs to regain a full meter of life but worry not - it doesn’t really affect game play much. There ends the bad news. The first of the good news cranks up when you find out there is badass story to be seen through the eyes of a normal trooper and trust me, the folks at Bungie didn’t drop the ball here, but I won’t spoil it for you. The new release also features a few kickers that set The Rookie on more even footing with the more experienced Halo fighters like Master Chief. To start off with, the ODST Visor can enhance your view with vital info such as available weapons on the field, a handy colored outline that ID’s friend or foe and enhanced light that will let you see even in pitch dark which happens a great deal. The 3D map available in the menu is a little funky until you figure out to set waypoints and that most of the time you will have to go through buildings or double-back more than you might have imagined.

I’ll mention this for anybody who’s played the first three installments and you may or may not believe it. The extra team characters in the storyline actually manage to help you and for the most part don’t die. They are voiced by some people you might of heard of as well but that is besides the point, it’s done so well they become the characters after the second time or so you hear them. There’s also a bit of fun with audio files that play a little side story if you manage to collect them all. This was completely unexpected but surprisingly fun to play out.

As with any Halo game there is more in ODST than can be put in a short review but it’s blindingly clear that this is a quality title. It is more tactical and makes the player think and use the environment more than in some other titles but when the environment sports more tanks, heavy weapons and large vehicles than any of its predecessors I’d say that’s not a bad thing.

And, as always – wait till the end of the credits for the epilogue. It stars a Halo favorite.

One Response to "Halo 3 ODST – Badassery"