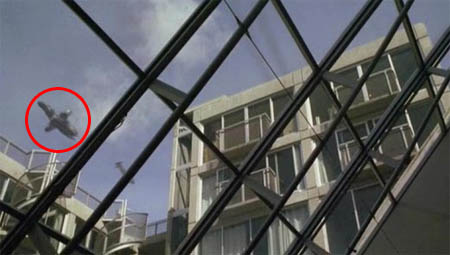 The sci-fi film/television production community is surprisingly close knit. Everyone seems to know everyone else, and it would be difficult to come up with two movies or shows that couldn't be connected "six degrees of separation"-style. With that in mind, it should come as no surprise that a lot of sci-fi contains nods to other works in the genre. One of my favorite things to do when rewatching sci-fi is to keep my eyes peeled for robots/ships/props/etc. from other TV shows or movies to make cameo appearances. And believe it or not, it's actually pretty common. Allow me to be your guide as we take a look at sci-fi past and present to explore some of the coolest -- and some of the most well hidden -- of these appearances.

Considering GWC's origin in Battlestar Galactica, let's start out with the show's miniseries. In one of the first scenes, when Laura Roslin is receiving some particularly bad news from her doctor, a firefly-class ship can be seen rising above the skyline out the window. We can thank the visual effects crew for this one; Zoic Studios pioneered the cinéma vérité-style "space cam" technique used to great success on BSG on their previous show, Firefly. Check out the screencap below to see the appearance.

Firefly has its own share of sci-fi meta-ness and references. Below is one example, where an Imperial Shuttle can be seen in the distance as Inara's shuttle docks with Serenity in the show's pilot. If you're in the mood to do some hunting, try to spot the Weyland-Yutani (the "company" of Alien fame) logo somewhere in the same episode. The Star Wars references don't stop there, though. In another seminal sci-fi film, Blade Runner, the Millennium Falcon makes a quite subtle appearance. In this still, you can see a building with a suspiciously familiar shape. As the story goes, the model effects supervisor was desperate to flesh out future Los Angeles' skyline. Running too short on time to create more buildings from scratch, he began to modify any model that was handy and could pass for a skyscraper with minimal modifications; the Falcon fit the bill. If you have trouble making the ship out, check out this production photo that shows the cityscape model under better lighting.

The cameo references continue on the next page, starting with another dose of Harrison Ford.