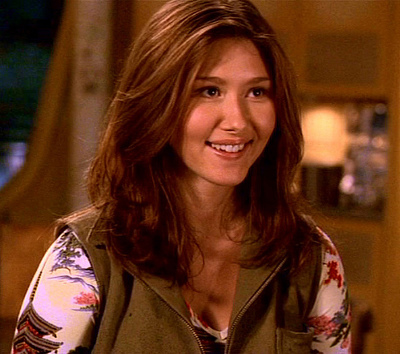 Is Kaylee A Good Role Model?

Kaywinnit Lee Frye, a.k.a. Kaylee. Beloved mechanic for the ship Serenity. Mal's girl Friday with an attitude. I think we all love Kaylee in our own way -- but is she a good role model? One definition of the term is "a person whose behavior in a particular role is imitated by others." Do parents want their daughters to behave like Kaylee? Should young adults imitate her? A more in-depth look at Kaylee should answer this question.

In Firefly's pilot episode, "Serenity," Kaylee and the crew of Serenity steal Alliance goods from an abandoned spaceship and try to sell them on Persephone. When this deal falls through and the crew moves to another buyer on another planet, a "Fed" shoots Kaylee in the stomach, almost killing her. By the end of the episode, Jayne carries a recovering Kaylee to the engine room where she directs him in repairing the engine so Serenity and her crew can escape. Stealing goods and selling them for profit is obviously not a moral act, but Kaylee survives a gunshot wound and guides her shipmate in repairs, playing a big part in saving the lives of her fellow crew members. While this doesn't negate her role in the theft of goods, it helps to temper it. So far, I would say that she's 1-1 on the good role model checklist.

In "Shindig" we get to see a lot of Kaylee, including her anger at Mal for making fun of her as she admires a pink ruffled dress in a store window. By that evening, Mal has purchased the dress for Kaylee and is escorting her to a ball on Persephone. Kaylee is shunned by the other women but has all the men hanging on her every word -- those words being advice about ships and engines. The end of the episode shows Kaylee in her room gazing at the dress and humming ballroom music. "Shindig" is one of my favorite episodes and I think that Kaylee definitely shines here. Her naïveté allows her to brush off other women's rude comments about her manner and clothing, and her confidence in herself and knowledge of machinery allow her to speak unabashedly to the men at the ball. We can see through Kaylee that dressing up and going out in fancy clothes doesn't have to make you a different person -- you can just be yourself. Kaylee's at 2-1 on the role model checklist.

The episode "Jaynestown" finds Kaylee and Simon draped over each other and sleeping on a settee in the Canton bar after a night of celebration. When Mal finds them, Simon quickly insists that nothing happened, upsetting a pining Kaylee. We also see more of Kaylee's sexual side in "Out of Gas," where some of the back story on the members of Serenity's crew is revealed -- including how Mal met and hired Kaylee. In the flashback, Kaylee is on his ship in a "compromising situation" with then-ship's mechanic, Bester. When Bester tells Mal it will be some time before he can fix the ship, Kaylee corrects him, reaches down, and fixes it. Mal immediately fires Bester and hires Kaylee on the spot. It seems that Kaylee has had some sexual experiences that many parents would not want their daughters to imitate. On the other hand, Kaylee is completely comfortable with her sexual side and doesn't seem to have a problem discussing sex with the other crew. Being confident can be sexy, and Kaylee doesn't have a problem with confidence. That puts her at 3-2 on the checklist.

"The Message" finds us exploring a slightly different side of Kaylee. When the dead body of Private Tracey turns out to be alive, Kaylee finds herself flirting with the humorous young ex-soldier. When Tracey ends up getting shot and killed, Kaylee finds herself mourning for him. Kaylee lets us see her softer side during this episode and we get to see that the tough young woman has an emotional side as the death of Tracey deeply affects her. In the episode "Objects in Space," Kaylee is tied up by bounty hunter Jubal Early and threatened with rape for making any noise or trying to escape. Even in the face of this threat, Kaylee agrees to help River take the ship back, escapes her bonds, and releases the remaining crew members from their locked cabins. You can see how totally frightened Kaylee is but she overcomes this and to help save the lives of the crew. While Kaylee can be emotional, we see that she also has the ability to keep her emotions in check in a time of crises.

Where does that leave the checklist? 4-2. Is Kaylee a good role model? I say yes!

3 Responses to "Is Kaylee A Good Role Model?"