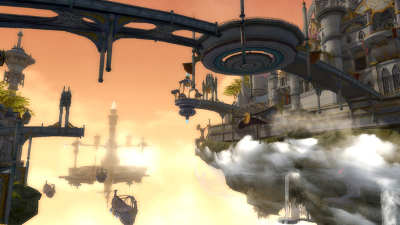 NCSoft announced on Friday that it will be opening up the beta version of their new MMORPG, Aion, on September 6th for a one-week period before the game is finalized for their release version, which comes out September 22nd. If you pre-order your copy of Aion now, you can get a two-day head start on gameplay beginning on September 20th. NCSoft's press release states:

Aion's Open Beta Test featuring version 1.5 will take place 6-13th September and will include numerous Western enhancements, including improvements to Aion's innovative character customization with a host of Western styles, as well as new zones, instances, skills, quests and continued game balancing and improvements. Open Beta will retain a level cap for both Elyos and Asmodians characters at 30 allowing players to focus on getting to the same level so they can explore the lands of Atreia together, as well as the Abyss.

If you wish to try the closed beta client to fight the celestial war as one of the four classes on Atreia, you can download the client from FilePlanet (you have to be a registered member of their service) or from GamersHell. This is a six-gigabyte file, so plan your download accordingly!

Once downloaded, you can try out their character creation tool to create your own unique character and become either a warrior, a scout, a mage, or a priest of one of two races: the Asmodians or the Elyos. According to the official game site, there are over 1500 quests with tons of expansion available to make your gaming experience your own. Characters fly with wings like the character Angel from X-Men, and combat is played in 3D. There is also a feature called "stigma stones;" according to the Aion game site, "Stigma stones allow characters to utilize and combine skills and abilities not normally available to that particular character's class." To get a better look at the game, visit Aion's game site for some awesome wallpapers like the example above and video clips. If you choose to play Aion, they also have a great powerwiki and a beginner's guide.

If you're like me and have never played an MMORPG, this game looks like an awesome introduction. Maybe someday you will see me out there, fighting my heart out as an Elyos warrior, but don't hold your breath -- Mass Effect 2 is just around the corner and it is calling my name!